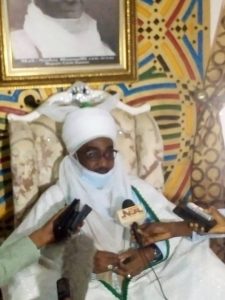 The Emir of Zazzau, Alhaji Ahmad Bamalli, has appealed to youths to embrace peaceful dialogue in the course of their agitations against the disbanded SARS.

The monarch made the appeal on Monday in Zaria, while addressing newsmen in his palace.

Bamalli was reacting to looting and destruction of warehouses in some parts of Kaduna state.

“I use this opportunity to call on the citizens of Kaduna State and Zazzau Emirate to reflect on what has been happening in the country for a couple of days.

“Destruction of life and property is not the answer or solution to the yearning and agitations by some people.

“This is something very strange to us. In this regard, I am calling on all the youths and other citizens to be law abiding.’’

“We understand that in the last 48 hours some unguarded elements have destroyed silos and food reserve. That is very wrong.

“We are happy that state governments have swiftly responded to prevent the spread of the criminal act,’’ he said

Bamalli said it was wrong for people to take laws into their hand by destroying the food reserve.

The emir commiserated with the people and government of Lagos State over those who died during the #ENDSARS protests in the state.