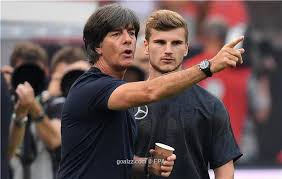 Coach Joachim Loew says forward Timo Werner is fit again and can start for Germany in the UEFA Nations League match on Wednesday against Switzerland.

But the coach also added on Monday that he wanted his players to be fully focussed.

Chelsea’s Werner played only a few minutes in Saturday’s 2-1 win in Ukraine in the wake of an illness, but Loew said he was back “at full strength’’ and “available’’.

However, Loew also said full-back Lukas Klostermann was nursing problems with the knee, while Marcel Halstenberg was with the adductor muscle, and midfielder Julian Draxler with the Achilles tendon.

The coach named the first-ever UEFA Nations League victory in Ukraine “an important result’’ for the team which showed “a desire to win’’.

But he wants his players to do better overall against the Swiss in a match in which veteran midfielder Toni Kroos is to earn his 100th cap.

“I expect focus, more precision and courage, and that we make the right decisions going forward.

“It will no doubt be very different from the Ukraine game. We will have to find solutions to deal with them,” Loew said.