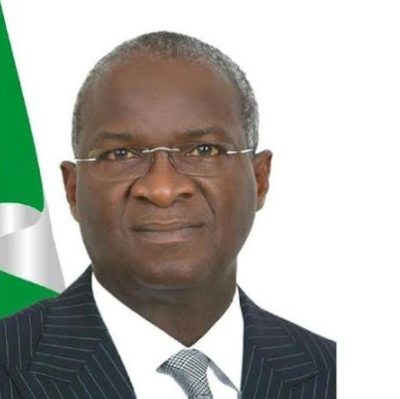 Minister of Works and Housing, Babatunde Raji Fashola, has come under serious scrutiny by some Nigerians including one of the members of the judicial panel set up by Lagos state government to unravel the circumstances of the shooting, Ebun Adegboruwa  after he was seen retrieving a hidden camera from the Lekki Toll Plaza during a solidarity visit to Lagos, while on inspection to locations destroyed by hoodlums during the #EndSARS protests.

BRF, on Sunday, was said to have a hidden camera at the Lekki Toll Gate, Admiralty Circle, Lagos, during an on the spot assessment.

Fashola, who led a Federal Government delegation at the instance of President Muhammadu Buhari to commiserate with the Lagos State Governor, Babajide Sanwo-Olu over the loss of lives and destruction of public and private assets in the violence that rocked the state last week, noted that words are not enough to describe the level of destruction wreaked by the arsonists.

Also, on the entourage for the inspection tour in the company of the press are some South-West Governors such as Kayode Fayemi, Ekiti state; Rotimi Akeredolu, Ondo State; Seyi Makinde, Oyo State; and Babajide Sanwo-Olu, Lagos State.

Fashola who discovered the camera during an on the spot assessment at the Lekki Toll Gate, subsequently, handed it over to Lagos State Governor, Babajide Sanwo-Olu for forensic analysis and further investigation.

The former Lagos State Governor said the camera must have been planted by some subversive elements prior to the reported shootings for ulterior motives.

However, some Nigerians have expressed reservations over the discovery. They believe it’s just an act put up by government officials to cover up for the shooting incident at the Lekki Tollgate.

In response to the minister’s action, Ebun-Olu Adegboruwa, SAN, has condemned the action, saying Fashola, by his action, has consequently, tampered with evidence. The Senior Advocate accused Fashola of usurping the powers of the judicial panel of inquiry, headed by Justice Doris Okuwobi, set up by the Lagos State Government to look into allegations of police brutality in the state.

According to him: “On Sunday, October 25, 2020, it was widely publicised that Ministers and Governors of the South-West visited the Governor of Lagos State on a sympathy tour of structures affected by the wanton looting and destruction that took place last week. In the course of their visit, they were led to the Lekki Toll Plaza, to assess the situation thereat. It was at the same Lekki Toll Plaza that the incident of alleged shooting of EndSARS protesters was said to have taken place. And based on public outcry, the Governor of Lagos State added the Lekki Toll Plaza incident to the terms of reference of the Judicial Panel that was set up.

“Since the Panel has been vested with jurisdiction over the Lekki Toll Plaza, I verily believe that it is illegal for anyone else to conduct any visit to the said Lekki Toll Plaza in the absence of and without the authority and consent of the Panel.

“It was reported that in the course of the visit, the former governor of Lagos State and the Honourable Minister of Works and Housing, Mr. Babatunde Fashola, SAN, discovered a hidden camera, which he took. This is a clear case of illegally tampering with exhibits that may become useful to the Panel in the course of its assignment.

“I appeal to the Governor of Lagos State to allow the Panel the full autonomy and independence that was promised at the time of inauguration. It is contempt of the Panel for anyone to usurp the powers of the Panel in the way that has been reported. In this regard, the Panel will not shy away from summoning anyone who is alleged to be involved in any contemptuous act that may obstruct the course of justice.

“I call on all Nigerians to come up with their complaints before the Panel for proper ventilation, as it begins its sitting today (Monday).