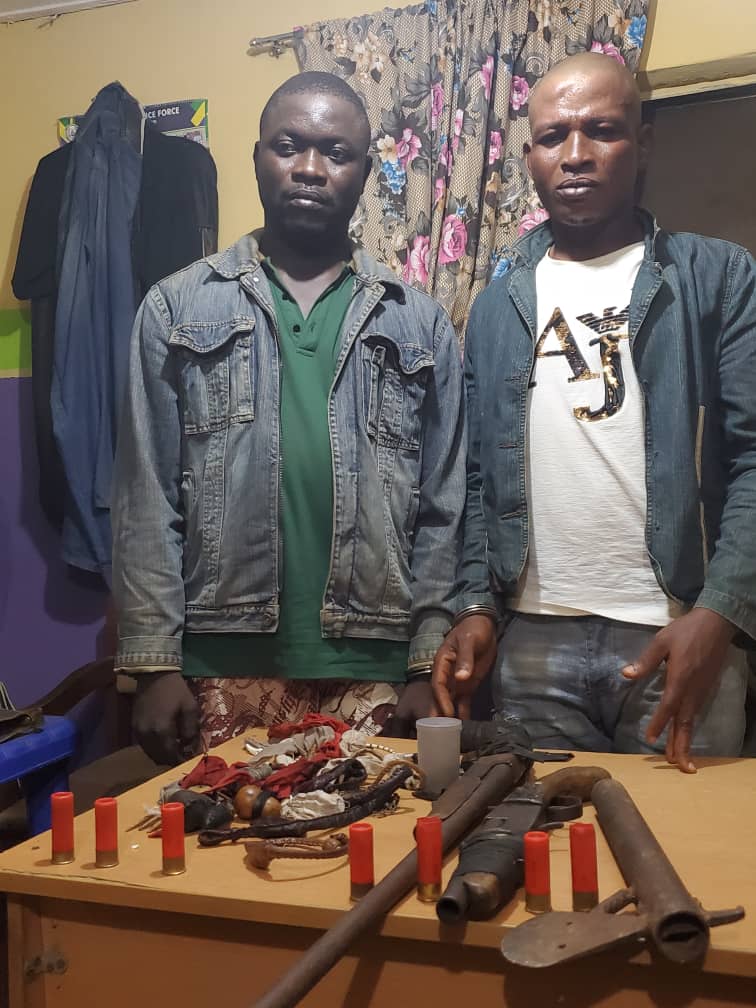 Two members of dreaded Eiye cult group, 34-year-old Oladayo Bello and Awobajo Muritala, 40, alleged to have been contracted by a yet to be identified notorious land grabber to unleash terror on some communities around Ogijo, Sagamu local government area of the state are now cooling their feet at Ogun State Police command, Eleweran, Abeokuta.

The two suspects, Oladayo Bello and Awobajo Muritala were apprehended following information received by the DPO Ogijo division, CSP Muhammed S. Baba that a group of Eiye cult members were gathering at Kanniyi area in Simawa where they were planning to attack some communities within the area on the instruction of a yet-to-be-known land grabber.

According to statement from the Spokesman of the state police command, DSP Abimbola Oyeyemi on Sunday, the crack detective officer, CSP Muhammed Baba was said to have swung into action leading his operatives to the already identified hideout where not less than twenty members of the group were met with various types of dangerous weapons.

The hoodlums on sighting the policemen reportedly opened fire on them and ran in various directions in  a bid to escape. The police however restrained from firing back to avoid killing innocent members of the public but got two of the alleged cultists apprehended.

Meanwhile, the Commissioner of Police, CP Edward Awolowo Ajogun has ordered the immediate transfer of the suspects to state criminal investigation and intelligence department for further investigation.

Ajogun equally ordered that the fleeing members of the group be hunted and brought to book. The CP has therefore warned land grabbers to stay away from the state as he will not hesitate to deal decisively with anybody trying to disturb the peace of the state under any guise.