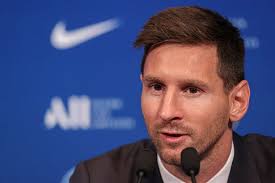 Carrasco feels Messi will seek to quit the Ligue 1 club if they flop in the Champions League.

The Argentina captain only left the Camp Nou for PSG last summer as a free agent.

But Carrasco thinks Messi could be back in Blaugrana colours at the end of this season.

“I see important clues regarding Messi’s return to Barca. And it may be sooner than expected. If the results do not follow, especially in the Champions League, he could demand his departure.

“The situation is difficult, but his return is possible.

“Messi is not happy in Paris. Not as much as in Barcelona anyway. If he sent a burofax to Barça, which is the team of his life, imagine what he can do at PSG if the club doesn’t win?,” Carrasco told El Chiringuito TV.

Messi is yet to find his best form in France’s top flight, scoring just one goal in 12 appearances in the league.

However, he has five in five for PSG in the Champions League.