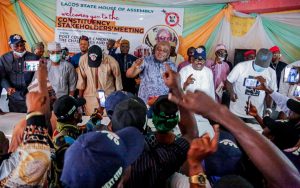 Mr. Mudashiru Obasa, the Speaker, Lagos State House of Assembly (LAHA), has advised the youth to shun any act of violence while expressing their grievances to the government.

Obasa, also Chairman, Conference of Speakers of State Legislatures, gave the advice during a Constituency Stakeholders Meeting on Thursday in Lagos.

The theme of the meeting, held in all the 40 Lagos State constituencies, was “Post COVID-19 Pandemic: The Challenges and Prospects”.

“Our youths should be well enlightened, to shun the attitude of destroying government property and burning of houses during protest.

“Though, the protest was hijacked by hoodlums, but our community youths must be protective enough to secure our heritage.

“Stealing is different from protest, they’re two different things entirely; at the same time violence cannot solve our challenges but to add more,” he said.

The speaker, who represents APC Agege Constituency 1, commended Lagos residents for their resilience despite the economic challenges brought about by the effects of the COVID-19 pandemic.

He commended Gov. Babajide Sanwo-Olu and his team for their prompt response in addressing the outbreak.

“The House approved the sum of N20 billion COVID-19 Intervention Fund aimed at containing and managing the spread of the virus in the state as well as mitigate its effect on Lagos residents.

“This legislative support, coupled with individual palliative efforts of honourable members in their various constituencies, has had a great impact on the successes recorded so far in the fight to effectively contain the ravaging disease.

“The economic headwind generated by the COVID-19 pandemic also necessitated the approval of the House for the reordering of the 2020 budget to provide necessary support for business owners.

“The vulnerable members of the society and improvement in healthcare facilities,” Obasa said.

The speaker noted that prior to the reopening of schools, a committee of the House went round schools to be sure of their preparedness.

Obasa also enumerated efforts made by the Assembly to ease the recent EndSARS protest in the state which later resulted in carnage.

“I recall how I and other members of the House met with the protesters at 12 midnight on Oct. 8, and immediately convened an emergency session to consider their demands.

“It could be recalled that the House, during the sitting, came up with demands to President Muhammadu Buhari, who promptly adopted almost all the resolutions,” he added.

Obasa, however, noted that all efforts by the state and federal government were thwarted by suspected criminals who hijacked the protests to cause mayhem and attack public and private investments and interests.

He urged the youths to be conscious of the fact that Lagos was a state that had achieved enviable heights, thus, its standard and peace must be maintained and sustained.

The speaker thanked Gov. Sanwo-Olu for the various projects that his constituency had enjoyed over time.

These include inner roads and the ongoing bridge at the Pen Cinema area of Agege.

Alhaji Ganiyu Egunjobi, Chairman, Agege Local Government, in his remark, said that COVID-19 must be kept on the front burner, given the havoc it was wrecking on the human race globally.

“Not few lives have been lost to the pandemic and somehow vaccine and cure still remain elusive.

“As it stands, we are just putting up with the marauding disease, which foisted on us the new normal; wearing facemasks and sneezing into our elbows rather than hands.

“It also requires us to keep a distance of at least a metre from each other and avoid spending time in crowded places, among others,” he said.

According to him, it may be worthwhile to touch on the fallout of the EndSARS protest in relation to the wanton destruction of property and loss of lives in Agege.

“I urge the youths to shun violence and embrace peace within the community,” the chairman said.

Hassan said that many roads in Agege were dilapidated, appealing to the speaker to take proactive measure in fixing the roads.