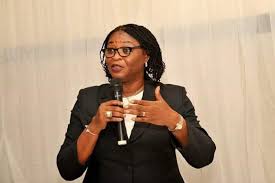 Mrs Titilayo Shitta-Bey, the Solicitor-General and Permanent Secretary, Ministry of Justice Lagos, has charged law enforcement officers to always maintain proper conduct in the discharge of their duties.

Shitta-Bey said that in relating with citizens, officers must uphold the principles which their uniforms represented, which, she said, included orderliness, peace, integrity, and proper conduct.

According to her, they should not be seen as extortionists, nuisance, aggressive and confrontational, as these negate the essence of their roles to maintain peace, law and order in the society.

She added that law enforcement officers were tied to the sixth pillar of the state’s THEMES agenda, and as such, must be good ambassadors of the government.

According to her, the THEMES agenda represents Traffic Management and Transportation; Health and Environment; Education and Technology; Making Lagos a 21st Century state; Security and Governance.

“Law enforcement is very critical to the development of a society, which is why it was included in one of the pillars of the THEMES agenda of the state.

“As an officer of the law, your uniform is a symbol of authority given to you by the state.

“Therefore, regardless of the sector, the underlying principles are the same. They include orderliness, peace, integrity and proper conduct.

“Once you understand that you occupy a position of authority, you will not stoop so low and exhibit undesirable characters, as this will not earn you any respect,” she said.

Shitta-bey also urged the officers to take the training seriously and deploy new methods of correcting people while maintaining order, for the smooth running of the state.

In his remarks, the Head of LETI, Mr Ifalade Oyekan, said that the institute would not relent in ensuring that officers were retrained and repositioned for a better Lagos.

He said that the institute had designed training modules, tailored to the specific duties of each law enforcement agency.

Oyekan expressed gratitude to Gov. Babajide Sanwo-Olu for his overwhelming support and encouragement towards making the institute fulfill its mandate of repositioning law enforcement in the state.

Newsmen reports that a total of 7,000 law enforcement officers are to participate in the 13-week training which is in 28 batches.

Newsmen  reports that 3,500 officers have already undergone the training.