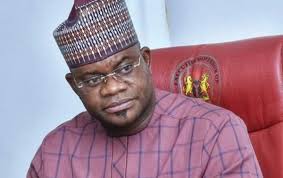 Gov. Yahaya Bello of Kogi says the State Government will soon begin prosecution of civil servants found to be compromising the workers’ payroll in order to fleece the state.

Bello disclosed this in a state broadcast on Thursday in Lokoja as part of activities to mark Nigeria’s 60th Independence Anniversary.

The governor said that the prosecution of the culprits would serve as deterrent to others with such intentions and to also sanitise the system.

He said, “Bringing consequences to those who compromised our workforce and payroll is one way we can forcefully deter such misconduct in future.

“To give you an idea of the huge scale of this problem, let me inform you that this administration had to clear over N50billion in salary obligations inherited from previous administrations.

“The bulk of that money was borrowed and along with our other debt obligations continues to impede our ability to free up funds for infrastructural and other development as we would like.

“Those whose actions hurt our state and people must face a reckoning.”

Bello, however, maintained that despite dwindling government revenues coupled with devastating effects of COVID-19, his administration would continue to meet its wage obligations to genuine civil servants in the state.

On the COVID-19 pandemic, Bello said that his administration adopted unorthodox approach to manage the situation, without resorting to lockdown or other restrictions, adding that God showed mercy to the people of the state.

He assured the people that his administration would continue to forge a synergy between science and common sense, medicine and governance in responding to the danger posed by the pandemic, until it is completely defeated.

The governor said that to improve the resilience of the people in the aftermath of the pandemic, his administration developed Bello COVID-19 Action Recovery and Economic Stimulus, (Bello CARES).

He said that the “Bello CARES” initiative was a homegrown palliative aimed at assisting the people of the state with various forms of succour.

“I salute the great people of Kogi State and all Nigerians on this 60th Independence Anniversary of the country. We return all the Glory to the Almighty God. He alone has sustained and maintained our nationhood,” Bello said.

He attributed Nigeria’s journey so far as a country to the resilience of the people saying, “It is a credit to our unbroken will to succeed and our resilience as a nation of diverse peoples that we have made it thus far.”