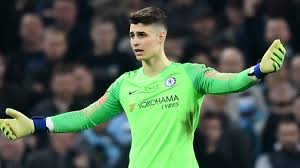 Chelsea goalkeeper Kepa Arrizabalaga has been tipped to accept a pay cut in order to secure his exit from Stamford Bridge in January as he bids to win back a place for Spain ahead of Euro 2021.

The effect for Kepa has been getting pushed further down the pecking order with the Spanish national team, where he is seemingly now third choice at best.

David de Gea’s loss of form for Manchester United actually saw Kepa installed as number one early in the Euro 2021 qualifying campaign, with the Chelsea man only then regaining his place for the easy wins over Faroe Islands and Malta.

But it has been fortunes reversed this season. With Kepa badly out of form and cast aside by Chelsea, De Gea’s resurgence, helped in no small part by improved competition at club level, saw him retake the number one jersey when the UEFA Nations League campaign kicked off in October.

When De Gea was rested for the Netherlands friendly earlier this month, Spain coach Luis Enrique overlooked Kepa to start new call-up Unai Simon, who has replaced him at former club Athletic Bilbao. Simon then kept his place for subsequent competitive games against Switzerland, Germany, while Marca even describe the player as one of six ‘untouchables’ for the national team.

With Euro 2021 appearing on the horizon, Kepa may now be struggling just to keep his place in the squad given that he isn’t playing at club level.

The Sun has reported that the 26-year-old has accepted his time at Chelsea is up and is prepared to accept a loan and a reduction to his £150,000 per week wages to head elsewhere and have a chance of reviving his once-promising career.