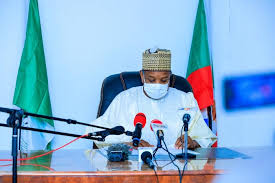 The Kebbi State Government has approved N20 million for the treatment of indigent cancer patients in the state.

Hassan Ibrahim-Maigandi, Permanent Secretary, Kebbi State Ministry of Health, stated this in a statement on Thursday in Birnin Kebbi.

Ibrahim-Maigandi said the amount was meant for the continuation of cancer treatment programme initiated in 2019 across the state.

He said Gov. Atiku Bagudu having realised the devastating nature of cancer and the effect of its management on low-income earners, decided to intervene.

Government intervened by approving N10 million as financial assistance to the identified vulnerable cancer patients in the state, from that approval about 60 cancer patients benefited.

“By 2020 when the funds were exhausted, in his magnanimity, the Governor approved an additional N20 million for the continuation of the programme.

“As a result, individuals and corporate bodies were called upon to partake and donate during launching and many of them made donations for the sustainability of the project.

“Arising from the successful launching of cancer Patient Indigent Fund, the Critical Sub-committee of the Kebbi State Cancer Steering Committee which is charged with critical evaluation of cancer patients, met on Nov. 20, 2020.

“They considered and approved the release of funds to 38 indigent patients suffering from various cancers.

“While this is the first tranche of disbursement, we also encourage members of the private and corporate organisations to continue donating to the fund,” he said.

Ibrahim-Maigandi identified some of the cancers for which the patients would benefit from the intervention to include breasts, prostate, bladder, adenocarcinomas and cervical cancers.

He said the patients would receive treatment from various hospitals in the country such as surgery, chemotherapy and radiotherapy.

The permanent secretary said that the funds had been disbursed directly to the respective teaching and specialist hospitals based on the financial submission of the hospitals on the identified cancer beneficiaries.

He appreciated the governor and his wife, Dr Zainab Bagudu, for the creating such fund-raising system.

It was reported that the wife of the governor is a board member, Union for International Cancer Control (UICC) and founder, Medicaid Cancer Foundation, initiator of the indigent cancer patient fund.