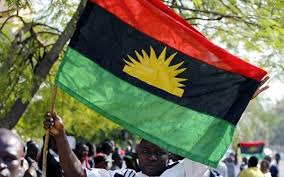 The Indigenous People of Biafra, I(POB),  on Monday, reportedly  hoisted its flag at Ekile Community in Ado local government area of Benue State

The flags were seen at strategic locations in the Community which border with another community in Ebonyi State.

Nigerian NewDirect regards that the Ekile is a district in Ado local government area of Benue State which served as a host community to several Izzas and Ezzas from Ebonyi State.

It was further learned that the incident happened on early hours of Friday last week when some members of the Ekile Community raised alarm having woken up to discover that Biafran flag has been hoisted in their community.

The chairman of Ado local government area of the state, Comrade James Oche, confirmed the incident.

Comrade Oche explained that he received distress calls from some prominent individuals in Ekile district informing of the development.

The chairman who spoke through the supervisory councillor for education, Information and social development, Mr. Attah Ede, expressed shock over the development, saying that there is no part or section of Ado land that belongs to Ebonyi and there is Biafra community in the local.

According to him, the local government had commenced immediate investigation to unravel whoever perpetuated such heinous crime.

He assured that no part of Ado local government communities would be ceded to IPOB.

“Yes, it was true that some people suspected to be IPOB  members went and hoisted Biafra flag at Ekile Community in my local government area. The action is unwarranted and condemnable. It is a mischievous act to stir crisis in our area but we will not give for that.

“We are yet to ascertain their mission and why they think such thing should be done in Ado. Ado belong to Benue State and Benue is one of the states in the North central Nigeria. We are not Southeast and we can never be. Therefore IPOB should keep their activities off Ado communities and Benue as a whole”, Oche stated.