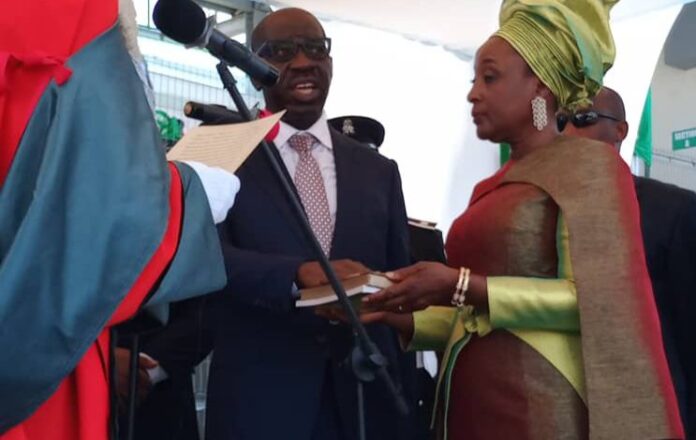 Governor Godwin Obaseki  yesterday took oath of office for a 2nd term as the governor of Edo State, promising to make the State great again

The governor took the oath by placing his hand on a Bible which was held by his wife, Betsy who stood beside him while State Chief Judge Justice Esohe Ikponmwen, administered the oath.

This was after his deputy, Mr Philip Shaibu, also took his oath of office by placing his hand on a copy of the Bible held by his Wife, Mary, who stood beside him.

The Governor after taking the oath with Dr Osagie Ehanire representing the  President, observed a brief parade by the Nigerian Police and thereafter read an inauguration address.

Dignitaries present were Governors of Sokoto and Delta state, Rt Hon Muhammad Tambuwal and Dr Ifeanyi Okowa, with deputy governors for Ondo, Bayelsa and Rivers, as well as the National Chairman of the PDP, Mr Uche Secondus among others.

In his inauguration address, he said Edo State is a testimony to the awesome power of God Almighty and the indomitable will and determination of the great people of Edo State.

According to him, “My re-election represents a new hope and I see myself as a vessel in the redefinition of democracy in Nigeria and I am not unaware that this places enormous responsibility on me.”

The governor said, “There are many sides to the victory we are relishing today. Aside from the fact that it restores hope in democracy as a form of participatory government, our victory also offers an opportunity for us to bridge the gap between a challenged past and a promising future.”

On his plan for the next four years as contained in his manifesto, Make Edo Greta Gain, MEGA he said, “In realizing our vision as reflected in the MEGA manifesto, we will focus on the following priorities areas—

“Grow our Social Sector by constantly improving our Education, Healthcare System, provision of social security and safety nets, caring for the vulnerable and the disadvantaged in our state;

“Build the Economy and drive Industrialization, Trade and Investment, to solidify our state’s status as the choice investment destination in the country;

“Preserve the Environment and Public Utilities, to make our state more functional and adapt to the challenges of climate change and rural-urban migration. Our major drive will be the clean and green Edo initiative and sustaining our campaign to plant trees and restore the forest;

“Enshrine Peace amongst our people and improve the general security to lives and property within the state, by working closely with all religious, traditional and community stakeholders;

“Exploit Agriculture and Natural Resources, by tapping our God-given resources to provide food security, create wealth and improve the livelihoods of our people;

“Strengthen Public Service, Public Finance and Public Revenue, by recalibrating our workforce for the future world of work;

“Promote Arts and Culture, to preserve the past, document the present, envision the future, and use our arts and culture as a springboard to develop tourism

“Revamp the Transport sector, by developing transport infrastructure to a more modern and affordable system.”

He said, “We have identified key initiatives that will drive public service reforms over the next twelve months by accelerating capacity building; finding new ways of working and operationalizing the Civil Service Training Centre as a centre of excellence in training public servants.”