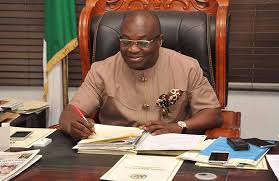 Gov. Okezie Ikpeazu of Abia has called on stakeholders in the state to complement the efforts of the state government in promoting peace and unity.

Ikpeazu made the call on Monday during a town hall meeting organised by the state government in line with the Federal Government’s directive for stakeholders’ meetings in Umuahia.

The governor called on stakeholders in the state to do everything within their power to appeal to the youth to desist from wanton destruction of public and private property.

Ikpeazu said that it was unfortunate that the peaceful and well-intended protests by Nigerian youths  was hijacked by criminal elements to destroy public and private property.

He said that the town hall meeting was convened as part of government’s effort to identify the grievances of the youths and to evolve efficient solutions that would be used in tackling them.

He added that the essence of the meeting was to bring the stakeholders up to speed to what had befallen Abia as a result of the recent #EndSARS protests and to chart the way forward.

Ikpeazu expressed regret over the looting of four banks, burning down of Onions Market, a police station, and 18 brand new trucks belonging to an investor in the state.

He said that the events that played out in Abia could be described as a well-orchestrated plot by “imported youths” to take the state back in development.

He said the development called for serious steps to be taken in order to prevent reprisals on Igbo elsewhere, as most Igbo people live and carry out business in various parts of the country.

Ikpeazu disclosed that Abia government had remained committed to an inclusive government and would not relent in fashioning programmes aimed at protecting the interests of the citizenry, especially the youths.

“I seize this opportunity to send my heartfelt commiseration to those who lost property and lives during the #EndSARS protest. “

We may not have the capacity to replace all that was lost but we can provide a means to ameliorate their sufferings, ” he said.

The Minister of State for Mines & Steel Development, Dr. Uchechukwu Ogah, said that every Nigerian had the right to make demands, adding that such demands ought to be done through peaceful engagement.

Ogah commended the state government for obeying the directives of the Federal Government to convene the meeting to inform stakeholders on the negative implications of fanning the embers of violence and war.

He emphasised that the consequences of war which include violence, hunger, homelessness among others should be eschewed at all cost while unity in diversity should be encouraged by all.

According to him, national unity is the strength of the people, while appealing to the youth to harness  their potential in order to build a better society.

Rep. Benjamin Kalu, the Member representing Bende Federal Constituency at the House of the Representatives, urged the stakeholders to take the message of peace to the grassroots while assisting the government in ensuring peace and tranquility in their respective communities.

Kalu commended the government for creating an enabling environment to reduce unemployment among the youth saying  that it had become necessary for the youth to partake in governance.

He urged stakeholders to take the responsibility of securing their communities as a serious matter, saying that it had become clear that community policing was mandatory in the maintenance of  law  and order.

The Speaker of the State House of Assembly, Chief Chinedum Orji, expressed regret that the peaceful protest was hijacked by hoodlums, calling  for calm among the youth and urging everyone to join hands with government  in a bid to achieve peace in the state.

Orji appealed to the National Assembly to enact a job creation law which would be domesticated by the state House of Assembly to remove the bottlenecks encountered by youth entrepreneurs in accessing loans.

Responding, Mr John Godson, a clergyman, called for a review of the remuneration of the political class.

Godson said that the demands of the youth should be given priority as the government made efforts  to boost socio-economic development.

Also, Sarki Yaro Danlandi, the Chairman of South-East and South-South Traditional Rulers of Hausa Communities, said that the Hausa community had remained law-abiding citizens and contributed to the growth and development of the state’s economy.

Danlandi appealed to the government to expedite action in protecting the lives and property of the  Hausa community in the state.