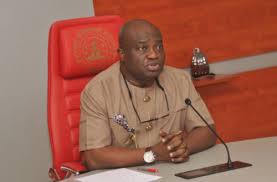 Gov. Okezie Ikpeazu of Abia has called for improved federal funding and investment for Small and Medium Scale Enterprises (SMEs) in the country to improve the nation’s industrial output.

Ikpeazu, who was represented by Mr. Chinenye Nwogu, his aide on Special Investment and State Focal Person for Micro SMEs Survival Fund made the call in Aba on Monday during a Town Hall Meeting with the trade association leaders and transport operators.

The programme was organised to sensitise SMEs and transport operators on accessing the Nigeria Economic Sustainability Plan’s (NESP) Artisan and Transport Support Scheme component of the MSME Survival fund.

Ikpeazu said that there would be no need for the importation of most goods from China if the state’s creative and productive industrial capacity was fully harnessed.

“Abia, especially Aba is unarguably the home of SMEs, it is unarguably the largest concentration of SMEs in eastern Nigeria, so we expect that this support, which is for SMEs that Aba should receive some attention.

“I will like to clarify that in the other components; Abia received a higher number of slots like in the payroll support, business registration and others.

“However, for this artisan and transport support scheme, which was distributed equally among all the states, we had expected to also receive higher than some states.

“States like Lagos, Kano should also receive higher than other states because they have larger concentration of artisans and transporters in the country,” he said.

Ikpeazu thanked President Mohammadu Buhari for endorsing the programme and making it easy for every interested operator in the affected sectors to access the funds.

Amb. Mariam Katagun, the Minister of State for Trade and Investment and Chairperson, Steering Committee on MSMEs Survival Fund said the MSMEs in Abia had contributed to sustainable growth of Nigeria’s economy.

Katagun, who was represented by a member of the NESP Steering Committee, Mr. Obadigbo Okonkwo, said the MSME and the guaranteed off-take schemes designed to save jobs and provide job opportunities were at the core of the NESP.

She said the implementation of the scheme began on Sept.10 beginning with the payroll support, artisan and transport support schemes.

Katagun said the scheme was targeted at 333,000 artisans and transport business operators who would receive N30, grant each with each state presenting 9,009 beneficiaries.

She said only operators with membership of registered trade associations or clusters with Bank Verification Numbers, bank accounts and drivers’ license or other valid forms of identification would benefit.

She said the officials of the ministry came to Aba to interact with the leadership of various associations with the view of getting ideas to improve the operation and implementation of the scheme.

Katagun said that the funds were grants given free and urged the leaders of the associations to help register their members and verify them accordingly.

A participant, who represented Aba Wood Workers Association, Mr. Ifeanyi Onyelowe said that the programme should help people support their businesses if properly implemented as they were told.

He however asked why government should take three months from the time of their registration to give them N30, 000, when the money had been marked out already by the Federal Government.