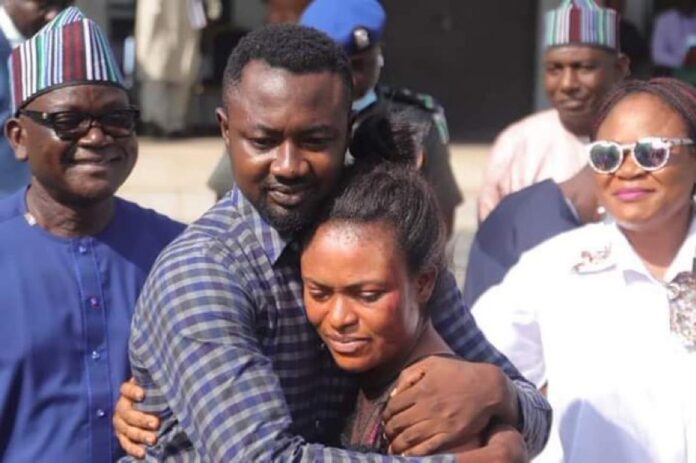 She asked for prayers, instead of people continuing to poke nose into her marriage.

She wrote: “Mind your business and leave my family alone. I have reconciled with my husband. Going forward, I want to make my marriage work. All we need now is your prayers.”

The medical doctor based in Owerri had cried out on Monday over the incessant beatings meted on her by her husband.

”Hello people, my name is Ifeyinwa. I am a doctor. I have been married to Pius Angbo of Channels TV for six years and for six years, I have not known peace in this marriage. It’s been from one woman to another. We have four children.

“I just had baby. It was a Caeserian section just about 4 weeks ago. Just because I told him to spend wisely and not on women so recklessly considering we have four children, that is why I got this beating. He tried to strangle me and all that, sat on my incision, the children were crying.

“When I was pregnant with this child, when the pregnancy was three months, it was the same thing. He would sit on my stomach hit me, try to strangle me and all that”.

With Channels TV disavowing domestic abuse and promising to probe the matter, Governor Samuel Ortom intervened and reconciled the couple.

Many marriage counsellors have however told the woman to bolt out of the relationship now.

Publisher of Genevieve Magazine, Betty Irabor in an open letter to women in abusive relationships wrote:

“Marriage is not a Do or Die affair, especially when you’re the one who is likely to DIE from abuse or end up in a psychiatric home as a living dead.

“FOR BETTER FOR WORSE doesn’t mean you should romanticize suffer head especially when you’re being used as a beast of burden or punch bag which triggers mental and psychological trauma”.

Ifeanyinwa now wants to take the risky route to give her husband a second chance for the sake of her four kids.