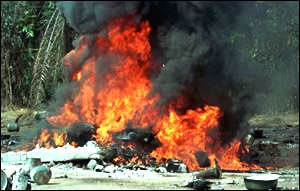 …in rememberance  of victims

The Ovie of Idjerhe kingdom, His Royal Majesty, Obokuwho  Arthur Monday Whiskey, Udurhie I  has appealed to the federal government to establish a degree awarding institution in commemorstion  of the victims  of Idjerhe fire disaster of October 17,  1998.

The Royal Father made the appeal today Monday, at the presentation of staff of office to him by the state government under able leadership of Senator ( Dr)  Ifeanyi Okowa.

He said Idjerhe Kingdom is a major player and host to a lot of all and gas exploration activities just as he said  they are blessed with huge votes population at the local, state and federal level and by this has contributed immensely  to the growth and development of the country at large.

He said:  “It is not out of place to appeal and request the federal government to establish a degree awarding institution in Idjerhe Kingdom  as a  mark of rememabrance of Idjerhe fire disaster of October 17, 1998 where the kingdom lost over 1,000 souls to pipe line explosion in Atiwor Village, Idjerhe.”

While expressing appreciation to the Delta State Government under the able learnership of Senator (Dr) Ifeanyi Okowa for the honour done him, he promised to use his wealth of experience in the traditional administration of the people geared towards promoting peace, unity and progress of the people in the kingdom.

He said: “ l promise to bring my wealth of experience to bear to promote peace, unity and progress of peace- loving people of Idjerhe kingdom.”

Earlier in his address, the Delta State Governor, Senator (Dr) Ifeanyi Okowa expressed joy that ldjerhe  as a kingdom has got a king to pilot the affairs of the people in this capacity.

The Governor who was represented by his Deputy, Barr. Kingsley Otuaro charged the new king to do his best to see that the people are carried along  in the administratiom of the kingdom.

While thanking the new king HRM Monday Whiskey, Udurhie I , for the ascension of the Royal throne, he prayed for  God”s  protection, gudiance and peaceful reign in the kingdom.

The highlight of the ceremony was the presentation.of the staff of office to the king amidst cheers