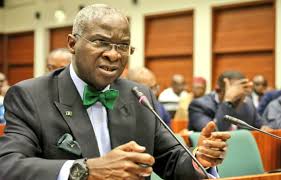 Fashola made sid this on Thursday in Abuja when he appeared before Senate and House of Representatives Committees on Housing to defend the 2021 budget estimates of the ministry.

He said the liabilities were incurred from 29 contractors executing projects in the urban and regional developments department of the ministry.

Others are 59 from Engineering Services, while Public Building and Housing Development had 794.

According to him, Lands and Housing Developments has 10, Public Private Partnership has 11, while Special Project Unit has 11 contractors.

He, however, said that the ministry had also completed a total of 1,786 National Housing projects across the country from the 3,926 housing projects initiated by the Federal Government.

He added that the 2021 budget would be anchored on the completion of the remaining 2,140 housing units under the national housing programme in 34 states of the federation and the FCT.

On issuance of Certificate of Occupancy (C of O), the minister said total of 3,950 C of Os and 1,246 consent were issued and granted to Nigerians from January 2018 to January 2020.

According to him, some of the requests for the C of Os date back to 1996, noting that the issuance would further accelerate economic growth and development in the sector.

He said that the major factor militating against the timely completion of housing projects was insufficient budgetary provision for the projects to sustain annual cash-flow requirement levels.

Fashola also said there was need to complete all ongoing projects before embarking on new projects.

Meanwhile, on performance of 2020 budget by the ministry, Fashola said out of the N72 billion appropriated for capital projects, N48 billion was released to the sector representing 67.41 per cent of the sum appropriated.

For overhead cost, he said N72 million was released, representing 61.05 per cent of the N118 million appropriated.

On the 2021 fiscal estimates, Fashola said that N76 billion was proposed as capital while N188 million was for overhead cost and N5 billion for personnel cost.

Earlier in his opening remark, Chairman of the Committee, Sen. Sam Egwu (PDP-Ebonyi), said the committee expected the minister to provide detailed explanation on the performance of the 2020 budget and proposal for 2021.

Some members of the committee also expressed concern about the huge amount of outstanding liabilities due to contractors in the sector.

They emphasised the need for government to settle the liabilities given the importance of the sector to economic development of the country.