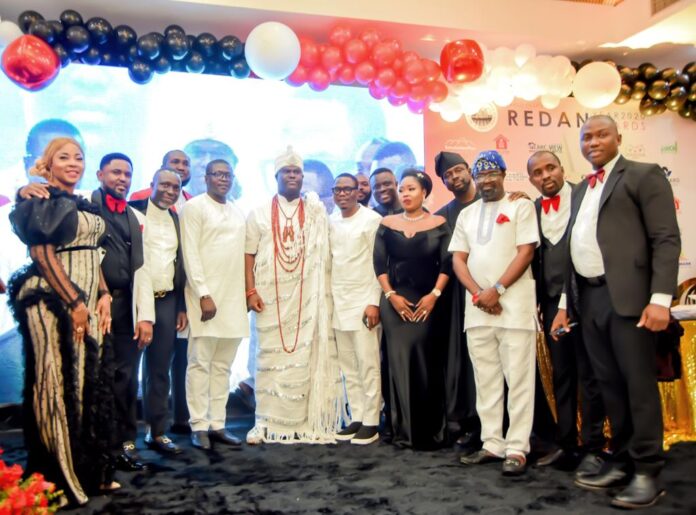 The Real Estate Development Association of Nigeria (REDAN), has honoured the Lagos State Governor, Babajide Sanwo-Olu, Ooni of Ife, Oba Adeyeye Ogunwusi, among other awardees for their endless effort in the real estate sector.

Speaking at the REDAN Lagos Award 2020 held in Lagos, the Governor of Lagos State who was represented by the Hon. Commissioner  for Housing Lagos State, Mr Moruf Akinderu, commended the association for their support in tackling housing deficit and housing development  in the state.

He said the state government has showed commitment in working together with the REDAN  to make Lagos homes a place of comfort.

Moruf stressed that the state government has also put in place necessary tools for estate developers which will  make them carry out their duty easily without any hindrance.

Also speaking at the event, the Ooni of Ife, Oba Adeyeye Ogunwusi, urged lagos state Government to support  estate developers through allocations of lands to drive the state revenue.

He explained that the government can make money in real estate sector through  partnerships with REDAN by providing infractures that will enable  drive the sector.

“Housing is the solution to the country’s dilemma. We have to be involved in urban regeneration to reduce housing deficit in Nigeria.”

Furthermore, the Chairman, REDAN Lagos, Mr. Bamidele Onalaja, highlighted some achievements, said that the executive has worked on a presentable office in Lagos with the support of members.

According to him, “it gives me great joy to welcome everyone to the REDAN LAGOS AWARD 2020, when the excos were inaugurated  in August 2020, the job was so enormous and we still keep working.

“The executive also worked on how to have a workable and presentable  office for the Lagos REDAN, this was achieved  with the support of the most REDAN members, we now have a befitting office in Lekki and another annex in Ikeja.

“We believe that the work has just started that is why we are so happy that you all honoured our invitation  to witness a New Lagos REDAN,” he said.