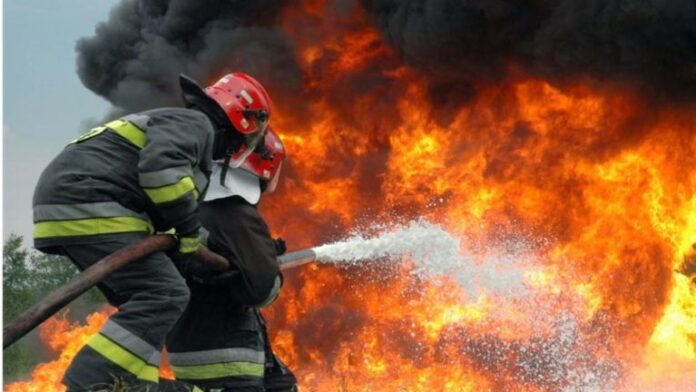 … As Lagos Firemen already concluding resue operation of the warehouses

The men of the Lagos State Fire and Rescue Service are currently battling to put out fire that engulfed the two warehouses belonging to Guinness PLC, opposite Sunday Market, Wemco Road, Ogba, Lagos.

The Acting Head of Lagos State Fire and Rescue Service, Mrs Margaret  Adeseye, who disclosed this morning , stated that a distress call was received at about 0330hrs to Wemco Road,  Ogba where it was discovered on arrival that twin warehouses belonging to Guinness PLC was on fire.

She said that immediately when the call was received, the State firefighters were deployed to the scene of the incident from Alausa and Ilupeju Fire Stations to rescue the situation.

Adeseye also explained that the cause of the inferno that gutted the warehouses which is used for storing plastic containers and bottles is yet to be ascertained at the moment.

While saying that the rescue operations by the firefighters to put off the fire is already at conclusion stage, the Acting Head of the Fire Service informed that there was neither death nor injury recorded as a result of the incident.