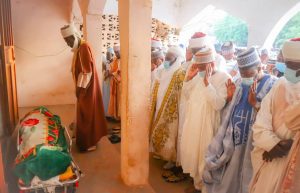 Late Yahaya Bawa died on Friday at the age of 97 at the Federal Medical Center, Birnin Kebbi after a protracted illness.

Malam Yahaya Sarki, Special Adviser to Gov. Abubakar Atiku-Bagudu on Media, made this known in a statement made available to the Newsmen in Birnin Kebbi on Saturday.

He was the first Chairman of Jega Local Government Area in 1976 after the local government service reform, Chairman of Pilgrims Welfare Agency in the then Sokoto State in 1980 as well as Board member of Delta Steel Company among others.

The deceased also served as the Chairman of United Nigeria Congress Party (UNCP) and All Peoples Party (APP).

He was buried at his home town, Jega, Kebbi State according to Islamic rites on Friday.

Condoling the family members, the governors prayed to Almighty Allah to grant him Aljannat Firdaus and give the family the fortitude to bear the irreparable loss. (NAN)