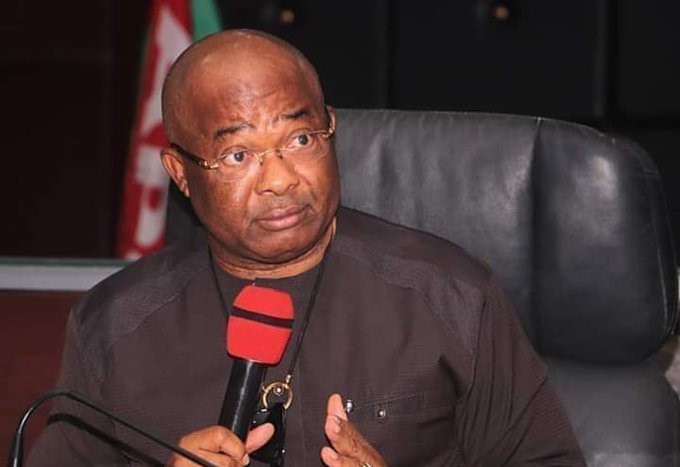 Gov. Hope Uzodinma, on Saturday appealed to the Federal Government and the private sector to assist Imo financially before erosion washes the state away.

Uzodinma, who made the plea in Abuja while delivering a lecture on “Promoting National Security and Sustainable Development” said Imo already has 300 active erosion sites cutting across the 27 local government areas of the state.

“Natural disasters are threats to national security. In this respect I must add that Imo State is facing one of the biggest security threats of ecological disasters,’’ he said.

He listed gully erosion and flooding as the state’s major threats.

“It is self -evident that when more and more people are displaced from their homes and farmlands by natural disasters, poverty, hunger and inequality will thrive and consequently exacerbate existing insecurity situations.

“Those displaced add to the army of the poor, hungry and jobless population who may device violent means of livelihood.

“Indeed the issue of erosion was the first matter I raised in the Senate immediately I got to Abuja 2011. Eight years on, I won’t say that much has been done to ameliorate the suffering of our people.

“I have approached the presidency and we are also talking with managers of the Ecological Fund. We even appealed to the relevant international organisations, seeking assistance before Imo is swallowed by erosion.

“As I said, Imo does not have the financial capacity to address this problem. And this naturally brings me to the issue of activating effective actions for environmental sustainability and climate change actions in Nigeria.

“While the Federal Government can provide the guidelines and to a large extent the funding, the private sector also needs to key into finding a solution by chipping in something also by way of funding

“I can categorically state in this respect that my government has been at the forefront of protecting the environment and relentlessly striving to save our people from the negative consequences of climate change.

“We have a full-fledged Ministry of Environment charged with the responsibility of articulating adequate response to environmental challenges.

“Apart from ensuring adherence to all protocols in Environmental Impact Assessment of all projects, the ministry is saddled with the responsibility of religiously following global environmental issues and responding appropriately where they apply to the state.

“Before we got the alert that our state is on the danger list of those to be flooded this year, experts in the ministry had planned some programmes to mitigate the effects,’’ he said.

The governor said states should also embark on aggressive awareness campaigns to educate the citizenry on what to do so as not to further degrade the environment.

“We are doing exactly that in Imo State. This aspect is not only necessary to forestall inimical practices, but much needed to save lives, especially when such activities threaten the collective existence of the people and the security of the nation,’’ he added.

Gov. Uzodinma said that while adequate measures were being taken to tackle the effects of climate change, fund remained a handicap, particularly for the states.