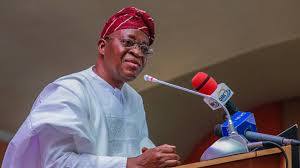 Gov. Gboyega Oyetola of Osun has directed the police to investigate the alleged killing of a youth by the Special Anti-Robbery Squad (SARS) in Osogbo.

Oyetola who said this in a statement by the state’s Commissioner for Information and Civic Orientation, Mrs Funke Egbemode on Wednesday in Osogbo, said the incident was shocking.

“The tragic events that reportedly led to the death of one person on Tuesday evening was both sad and shocking and the governor has ordered full investigation into the circumstances that led to it.

“While we appreciate the great job our law enforcement agencies are doing to keep Osun safe, the disruption to our peaceful state capital on Tuesday needs to be investigated.

“We hereby call on the Police Command in the state to launch a comprehensive investigation into this tragedy,” she said.

Egbemode appealed to the families of the deceased and those injured not to take laws into their hands by hurting more people or destroying property.

” We implore our citizens to trust the government to get to the bottom of this sad occurrence.

“Let us all go about our lives peacefully while we await results of the investigation,” Egbemode said.

Newsmen report that a group of youth in Osogbo on Tuesday staged a protest over the alleged killing of the youth.

The protesters, armed with sticks and other dangerous weapons, attacked passers-by during the protest