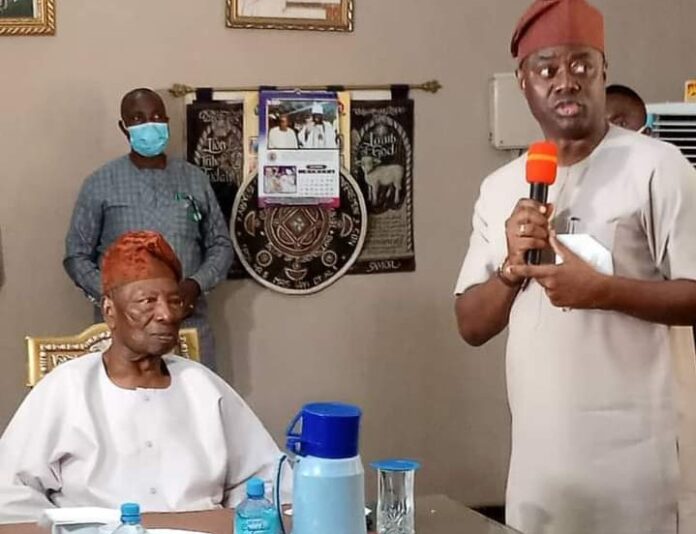 Oyo state Governor Seyi Makinde has ordered an immediate release of one hundred million naira to the Soun of Ogbomosho, Oba Jimoh Oyewunmi for renovation of the palace following invasion of the palace by hoodlums in the wake of ENDSARS protest.

The Governor gave the directive during a sympathy visit to the palace to assess the level of damages done at the palace.

Governor Makinde explained that beyond the ENDSARS protest, most Nigerians have become frustrated over prevailing harsh economic reality in the country and if government fail to address youth idleness with gainful employment there might be future disaster

He also noted that while his government was not against peaceful protest, protesters must be responsible enough to voice their concerns as the state government would work more at ensuring youths in the state were meaningfully engaged.

The Governor also instructed the commissioner for local government and chieftaincy matters, Chief Bayo Lawal and caretaker chairman of Ogbomosho north local government to make an evaluation of vehicles and other items destroyed for fixing.

“If you don’t do what is right to find things for these guys to do, the death anger will overflow, I believe we can address this. We may have to replace the vehicles completely. I will ask the chairman ogbomoso north and Commissioner of Local Government and Chieftaincy matters to come for assessment but I will release #100million immediately

In his response the Soun of Ogbomosho, Oba Jimoh Oyewunmi appreciated the visit, and urged government to wake up to it numerous responsibilities.

The Governor thereafter visited the families of the slain Jimoh Isiaka that was killed during the ENDSARS protest in Ogbomosho.