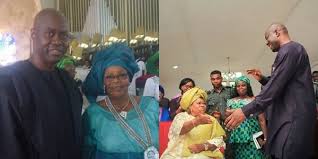 It was reported that Mrs Makinde died in the early hours of Thursday at the age of 81 years.

A statement issued on Thursday in Ibadan, by Chief Muyiwa Makinde, said that the deceased, who gave no indication of any sickness, died at her Ibadan home, No. 7B, Oyeleke Street, Ikolaba, Ibadan.

“While we appreciate the Almighty God for sparing her life thus far, we must confess that we will sorely miss her counsel, motherly role and impact on the lives of her children and the grandchildren.

“We will equally miss her impactful role as a stabilising force in the family, her community and especially Oyo state, which is currently being governed by her son and our brother, Engineer Seyi Makinde.

“We sincerely appreciate the prayers and condolences of our numerous well-wishers.

May Mama’s soul rest peacefully with her maker” the statement read.

Meanwhile, the Peoples Democratic Party caucus in the Oyo State House of Assembly, has commiserated with Gov. Makinde over the death of his mother.

In a statement issued on Thursday by a member of the caucus, Mr Akintunde Olajide the PDP lawmakers described the demise as a great and irreparable loss to the entire state.

The caucus expressed condolences to the Makinde family, the state executive council and the entire people of the state.

“Political leaders and all those who have had encounter with the deceased would forever miss her great words of wisdom and motivation,’’ the statement said.