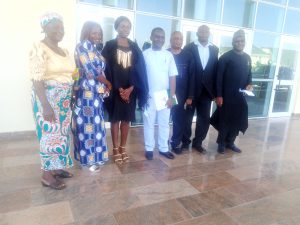 Gov. Simon Lalong has lauded 17-year-old Sylvia Ulan, daughter of a widow, for getting distinctions in all the subjects she sat for at the last Senior Secondary School Certificate (SSCE).

The governor commended Miss Ulan during her visit to his office on Tuesday, at Government House, Jos.

He said he was proud of her performance and would award her scholarship to a tertiary institution of her choice.

“I do not think anyone in the northern region got A1 in all the papers they sat for in this year’s SSCE exams,’’ he said.

In her appreciation, Ulan who is from Bokkos Local Government Area of Plateau attributed her success to God, her mother and her teachers, who helped in her studies.

“I want to appreciate God, I did not expect it, I know I worked hard but we were called back to school barely two weeks before the exams, thank God my hard work paid off,” she said.

The graduate of Premiere Academy School, Lugbe, Abuja, said she wants to study Chemical Engineering and be outstanding in the field.

It was reported that Sylvia Ulan got A one in, English, Math, Further Math, Chemistry, Technical Drawing, Physics, Civic Education, Geography and Radio Television and Electronic Works in the 2020 Senior Secondary School.