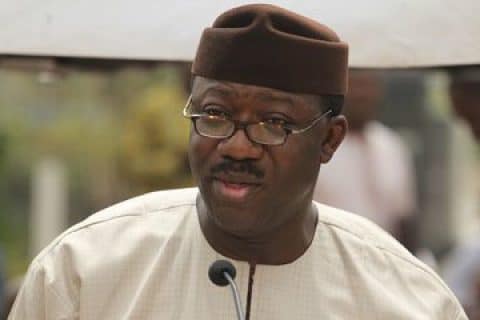 Gov. Kayode Fayemi of Ekiti on Tuesday presented a cheque of N100 million for the payment of gratuities to 41 retired local government workers and primary school teachers in the state for December.

At the presentation in Ado-Ekiti, Fayemi said that payment of the gratuities was in fulfilment of his promises to ensure that pensioners enjoyed a worthy life after their meritorious services to the state.

The governor, represented by Mr Biodun Oyebanji, Secretary to the State Government, reiterated his commitment to prioritise issues relating to the welfare and well-being of the pensioners.

He promised to sustain the techniques adopted by his government in defraying the outstanding gratuities.

Fayemi promised to continue to utilise his position as the Chairman of the Nigeria Governors’ Forum in leading a frontal advocate that would position issues and policies affecting the pensioners on the front burner of the government’s agenda.

He said that his administration would continue to try its best in making life comfortable for the retirees, urging the beneficiaries to spend their money on profitable ventures.

“You have laboured for Ekiti, and now you are to collect the fruit of your labour; it speaks to the commitment of the government at ensuring that gratuities and pensions are paid as and when due.

“It saddens my heart that many retirees that served their fatherland had not been paid their entitlements,” Fayemi said.

The governor assured the retirees that payment of pensions and gratuities would continue to be on the front burner of the state government policies.

“I can assure you that before this government winds down, there will be more batches of people that would have been paid.

“My advice is that as we collect this money, we should make judicious  use of it,” he said.

On the second wave of COVID-19 pandemic across the world, Fayemi cautioned the elderly citizens to avoid large gathering, maintain physical distancing and adhere strictly to other safety protocols.

According to him, this is to preserve their lives and contain the spread of COVID-19 pandemic.

The governor also urged old people, considered as one of the most vulnerable age groups, to take personal responsibility in observing the measures put in place to curtail the spread of the infection.

“I will advise also that as we celebrate Christmas and New Year, we should be guided and be reminded that COVID-19 is back.

“So, I will advise our people to observe social distancing, to watch their hands and observe other identified COVID-19 protocol.

“If it is not compulsory for us to go any where, as we celebrate Christmas and New Year, let us stay at home,” he said.

The governor had earlier laid the foundation of the new Secretariat Complex of the union in Ado-Ekiti.

At the ceremony, Fayemi assured the retirees of his support toward the timely completion of the project.

The Chairman, Nigeria Union of Pensioners in Ekiti, Elder Ayo Kumapayi, commended the governor for his policy on the payment of pensions and gratuities.

Kumapayi said that the payment had allowed his members to fulfil their financial commitments to the union.

He said the union’s new office complex was designed to accommodate an office, ICT section, a health section and a kitchen for the betterment of the union members.

Kumapayi said that funding of various projects, which his administration embarked upon, was drawn majorly from the check-off dues deduction of members.