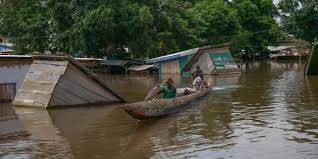 Some farmers in flood-prone areas in Rivers say the impact of previous years’ flooding and government’s approach to their predicament have rendered their situation hopeless.

They made their views known in separate interviews with the Newsmen in Port Harcourt.

Dr Patricia Ogbonnaya, one of the farmers and Crown Princess of Ekpeye Kingdom, Ahoada-West Local Government Area of Rivers, said farming had ceased in the area.

Ogbonnaya also alleged that her fish farm, occupying two and half hectares of land was destroyed by flood in 2012 and since then she could not do anything again because the flood was now an annually event.

She said that there was no farmland or village in Ekpeye Kingdom that were not affected by the annual flooding, adding that no measure was on put in place to help us.

“Our situation is compounded with the fact that the National Emergency Management Agency (NEMA) had classified us this year as low risk area.

“What it means is that, no provision would be made for us again while we are annually affected and it so a confirmation that NEMA has been doing nothing,’’ she said.

According to Ogbonnaya, in spite, of losing her farm to flood, she mobilised princesses in the area to contribute money to support women and children.

“As bad as my situation is, I still mobilise other princesses. We tax ourselves to buy noodles, rice and garri to help women and children whose cases are worse.

“It is only the LGA that is doing its best but the case requires the intervention of the federal and state governments.

A farmer in Ubeta Community of Ahoada-West LGA, Mr Andrew Egbelu also said that farming business had been destroyed in the area because of flood.

Egbelu said that the agricultural entrepreneurs need remedy from government the cost of setting-up a farm was huge.

“I had fish, cassava and yam farm that was destroyed overnight by flood and I am back to square one because there is no funding support from government to enable us.

“Noodles and mattresses are for the community people and not for business people that have lost so much,’’ he said.

Egbelu said that camps for Internally Displaced Persons (IDP) were yet to be seen and flood was an annual issue that plans for 2020 ought to have been concluded by March.

He urged government at all levels to embark on massive sensitisation of people in flood prone areas.

Mr Walson Brandon, South-South Zonal Coordinator of NEMA in Rivers, said the Federal agency was ready to do its best should the flood overwhelm the LGA and the state.

Brandon said that NEMA was meeting with critical stakeholders in Rivers to ensure that proper mitigative measures were put in place.

He said that the Rivers Ministry of Special Duties had designated some primary school buildings to be used as IDP Camp should the flood overwhelm the villagers.

The zonal coordinator said that apart from natural occurrence, flood incidents could be attributable to poor waste management and distortion of development plan along natural waterways.

Mr Uzoma Godwin, the Disaster Management Coordinator of the Nigeria Red Cross Society in Rivers, called for a sophisticated disaster management team to be I’m place.

Godwin said that flood had caused disruption of normal life such as education, health, community transportation among others.

“So, the mitigation, response and recovery measures need to be in place to manage and reduce disaster,” he said.

In Cross River, efforts have been put in place to mitigate flooding in flood-prone communities.

The State’s Emergency Management Agency (SEMA) had since inaugurated sensitisation committee across the 18 local government areas of the state to sensitive residents living in flood prone areas.

The Director-General of SEMA in Cross River, Mr Princewill Ayim, told NAN in Calabar that the objective was to enlighten the people, especially those living in swampy areas on the dangers of flooding.

According to him, it is important for residents living along the water ways to move up to higher lands in other to avoid loss of property and lives when the rain overflows.

“Cross River is a riverine area and most of the communities are prone to flooding. As we speak, we have inaugurated a sensitisation committee against flooding in all the 18 local government areas across the state.

“We are calling on residents in the state to call the state emergency free toll line of 112 in case of any emergency outbreak around their locality,” he said.

The Director-General of NEMA, retired Air Vice Marshal Mohammed Mohammed, during the programme disclosed that 254 communities in 14 local government areas across the state were flood-prone.

According to Mohammed, who was represented by the South-South Zonal Coordinator of NEMA, Mr Walson Brandon, residents need to clear their gutters and desist from dumping refuse inside the drainage to avert flooding.

“NEMA is carrying out this sensitisation of vulnerable flood communities in Cross River following the release of the 2020 Annual Flood Outlook by NIMET.

“The forecast captured 14 local government areas in Cross River to be affected and this will spread across 254 communities in the state,’’ he said.

Newsmen reports that no serious cases of flood have so far been reported in the state this year.