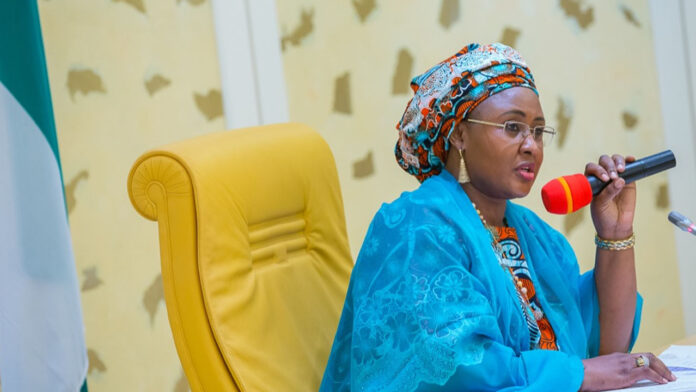 Wife of the President, Mrs Aisha Buhari, on Thursday urged stakeholders to engage government towards formulating policies that would promote breastfeeding as a practice in the country.

Buhari made the call at the commemoration of World Breastfeeding Week with theme, ‘Step up for Breastfeeding: Educate and Support,’ by Staff of State House Clinic in Abuja.

“I urge you to consolidate your role as custodians of breastfeeding, to engage government towards making policies that protect and promote breastfeeding as a practice.

“Breastfeeding provides babies with natural food that contains all the nutritional values that babies require as a natural remedy that protects the baby from all kinds of diseases,” she said.

She called for stronger collaboration among actors to strengthen the world chain of breast feeding.

“Let us all join our hands to educate, support and encourage our mothers to breastfeed their babies sufficiently for a healthier nation.

“Our fathers and daddies have a very great role to play by providing our mothers with good nutritional foods to feed the baby.”

Buhari, however, affirmed her support for breastfeeding which she said was key to nation building.

“As the First Lady of the Federal Republic of Nigeria, I am also a key actor, I pledge my support to uphold and promote breastfeeding among others.

“It is important to pay emphasis on educating mothers on the advantages of breastfeeding; this process needs to involve all stakeholders, including fathers, family members and the community.”

Umar, represented by Alhaji Bukar Mala, assured of their continued support to nurture the practice of exclusive breastfeeding for both healthy mother and child.

“The State House administration has been committed to the initiative by supporting the staff through training, workshop and other activities of breastfeeding support group.

“Additionally, the administration has made a creche available at the state House Clinic to support staff who are nursing babies to breast feed.”

Adekunle also identified intellectual development as one of the greatest benefits of breastfeeding.

“And for the mother, not only does it reduce child mortality, it also reduces maternal mortality and illnesses in the mother.

The Medical Practitioner also dismissed misconceptions about breastfeeding, saying they were not based on facts.

“There are so many misconceptions about breastfeeding and most of them are myths, they are not founded on any real fact.

“A mother that breastfeeds a child will not have a sagging breast because of that.”