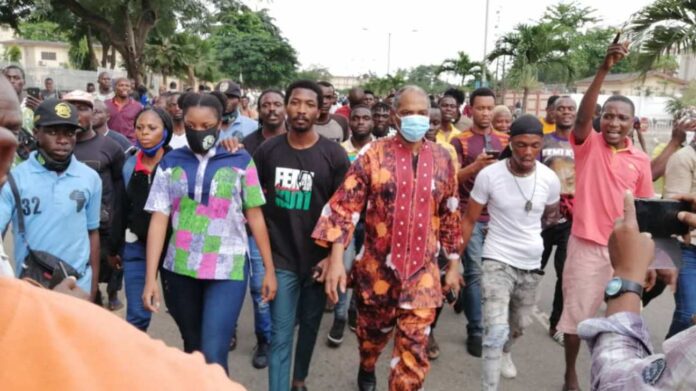 The musician who joined the protests at about 1:30 pm assured them of the support of Nigerian youths just as the protesters shut down Lagos/Ibadan Expressway thereby preventing vehicular movement in the axis.

Meanwhile, many road users were stranded as a result of the protests as many vehicles could not gain access to the expressway.

Popular bus-stops in the axis especially Secretariat, Tollgate and Berger witnessed many stranded commuters who were unable to complete their journey to or fro the State.

The protests have generated mixed feelings in the axis as some road users stood in support while others stood against the protests.

A road user said he missed a very important appointment as a result of the protests as he was caught up in between Secretariat and Otedola Bridge.

Also, many commuters who could not endure the situation were forced to trek a long distance on the ever-busy expressway.

Meanwhile, the protesters have continued to show persistence in continuing the protests until the government meets their demands.

A female protester, Adaeze Olisah said the youths are planning to introduce features to make the protests more interesting.

“We are protesting in the interest of Nigerians and are ready to introduce games and any other feature that will make the protests more interesting as from tomorrow.”

#EndSARS: S/E Governors urge youths to ensure cessation of hostilities, protest in every part of the country

#EndSARS: S/E Governors urge youths to ensure cessation of hostilities, protest in every part of...