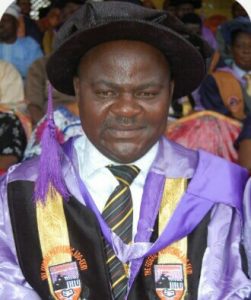 The management of Federal Polytechnic, Ado-Ekiti, has appointed Mr. Olusegun Dada, as its new Deputy Rector (Academic), the Newsmen reports.

Dada’s appointment is contained in a statement, signed by Mr. Ade Adeyemi-Adejolu, the institution’s Director of Protocol, Information and Public Relations on Friday.

“The appointment of Dada as Deputy Rector (Academic) was ratified by the Academic Board of the institution.

“Dada, 54, who is the outgoing Dean of Students Affairs and former Head of the Department of Accountancy, is an alumnus of the institution and a Fellow of the Institute of Chartered Accountants of Nigeria.

“Aside from the ND and HND obtained in accountancy from the Federal Polytechnic, Ado-Ekiti, the new Deputy Rector (Academic) also holds two Bachelor degrees in Accounts and Accounting Education.

“He also holds an MBA degree as well as two other Master degrees in Accountancy and Finance respectively from Lead City University, Ibadan, and the Ekiti State University, Ado-Ekiti where he is currently undergoing Doctoral Studies,” it said.

In a related development, the management of the institution had announced three new appointments, among which are two Chief Lecturers, Dr Michael Adu and Mr. Ojo Anifowose.

The institute said that both have been respectively appointed as the Directors of the Institution’s Centre for Research, Innovation and Development (CRID) and Coordinator of the Students Industrial Work Experience Scheme (SIWES) and Industrial Liaison Unit.

Other appointees, whose appointment took effect from Nov. 1, include Ebenezer Adefidipe, who had been appointed as the Acting Director of the Olusegun Obasanjo Centre for Engineering Innovation (OOCEI), a copy technology Innovation Centre of the Polytechnic.

“The three newly appointed officers of the institution as Director, Coordinator and Acting Director have since assumed office,’ the statement said.