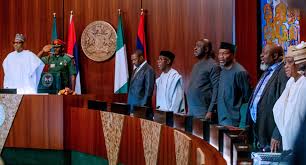 The Federal Executive Council (FEC) has approved the Finance Bill 2020 meant to support the smooth implementation of the 2021 budget.

It was reported that the Council approved the bill at its 24th virtual meeting presided over by President Muhammadu Buhari at the Presidential Villa, Abuja on Wednesday.

Minister of Finance, Budget and National Planning, Dr Zainab Ahmed, told State House correspondents at the end of the meeting that would also engender incremental changes in the nation’s tax laws.

According to the minister, the Finance Bill will be transmitted to the National Assembly for its consideration and passage into law.

“Through this finance bill, what we are seeking to do is to make incremental changes to tax laws relating to Customs and Excise as well as other fiscal laws to support the implementation of annual budget.

“When Mr. President presented the 2021 budget to the parliament he did direct that the 2020 Finance Bill will also follow to support the budget proposals.

“We are working on implementing current fiscal reforms in line with the Multi-Year Medium Term framework and over time we hope that with this Finance Bill, that the fiscal space will be reformed on an incremental basis.

“So this Finance Bill for 2020 was developed as a result of a very large multi-stakeholder effort under Fiscal Policy Reform Committee that has several ministries, departments and agencies as members but also the private sector, experienced tax practitioners and academics.

“During the process, we received a lot of suggestions from different stakeholders but we had to limit what we could take because, we are by three principles – to adopt appropriate counter fiscal measures to manage the economic slowdown, incrementally reforming the fiscal incentive policies of government and ensuring closer coordination between the monetary trade as well as fiscal authorities,’’ she said.

According to the minister, her ministry is working on how to provide adequate macroeconomic strategies to attract investment, to be able to grow the economy on a sustainable basis.

She stated that some highlights of these provisions include: “amendments that we have had to make provide incremental changes to tax laws.

“These amendments include; providing fiscal relief for corporate tax payers for instance by reducing the applicable minimum tax rate for two consecutive years from 0.5 percent to 0.25 percent.

“These reforms will commence and will also be closely followed by the cessation rules for small businesses as well as providing incentive for mass transits by reducing import duties and the levies for large tractors, buses and other motor vehicles.

“The reason (for us) is to reduce the cost of transportation which is a major driver of inflation especially food production.

“So we hope that we don’t have other crisis but we need to create such a fund so that it is available and it is legislated.’’

The minister also announced that the government would be amending the Fiscal Responsibility Act to enhance fiscal efficiencies and also to control the cost revenue ratios of government owned enterprises.

She expressed the hope that the amendment when carried out would enable the government to realize more operating surpluses from these enterprises.

“These reductions in taxes are being reinforced in the 2020 Finance Bill by further removing the education tax of two percent that the smallest businesses still have to pay despite their zero payment of company income tax.

“There are a lot of provisions in this bill, we will be publishing the summary of the draft bill on our various websites the moment Mr. President conveys the bill to the parliament so that we get inputs from the citizens as the parliament undertake its own review processes.’