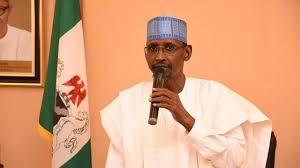 It said the decision was taken on Tuesday, as part of measures to stem the spread of COVID-19.

It also revealed the real reason for the ban: the unrelenting peaceful protests against FSARS and police brutality in the city.

According to a statement by Anthony Ogunleye, chief press secretary to FCT Minister, all street demonstrations, protests, and processions will not be allowed anywhere within its environs henceforth.

He said the security committee is satisfied with the directive by the Inspector-General of Police, Mohammed Adamu to disband the Special Anti-Robbery Squad {ARS} as well as other reforms aimed at enhancing the effectiveness of the Nigerian Police.

He added that despite the pronouncement by the IGP scrapping the unit, the #EndSARS protests continued in parts of the FCT, causing inconveniences to law-abiding citizens.

“The security committee has reiterated the commitment of the FCT administration to ensure that all residents are safe, secure, and able to go about their lawful businesses without fear of intimidation or harassment”.

The #EndSARS campaigners have not reacted.

According to NCDC figures, Abuja logged nine cases on Wednesday and 17 on Tuesday.

On Monday, the number of confirmed cases was 26.

The statistically insignificant number does not certainly indicate a resurgence of COVID-19 in the city.

The aim is stop #ENDSARS campaign.

The FCT Security Committee met for its routine meeting on Tuesday October 13, 2020, to review the security situation in the Federal Capital Territory with a view to addressing identified challenges.

After extensive deliberations, the Committee came up with the following resolutions:

iii. However, the Committee noted with concern that despite the pronouncement by the Inspector General of Police scrapping the FSARS, the #ENDSARS protests continued in parts of the Territory. The protesters caused inconveniences to law-abiding citizens.

vii. Clearly all these guidelines were flouted by the protesters.

viii. Consequently, the Committee directs that due to the dangers posed by COVID-19, all street demonstrations, protests and processions will not be allowed anywhere within the FCT.

xii. It however seeks the cooperation of residents to obey all extant traffic rules and regulations while travelling during this period.

xiii. The Committee also noted with satisfaction the successful re-opening of schools after the forced closure due to COVID-19. It however calls on parents, students and school authorities to continue to comply with the extant COVID-19 safety protocols.

xiv. The Security Committee reiterated the commitment of the FCT Administration to ensure that all residents are safe, secure and able to go about their lawful businesses without fear of intimidation or harassment.