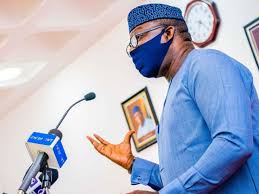 Fayemi, represented by the Speaker of the Ekiti House of Assembly, Mr. Funminiyi Afuye; at the event said that his administration would ensure that every school age children in Ekiti have access to basic education.

The governor also said that the projects that were inaugurated in Gboyin and Ekiti East Local Government Areas were to mark his two years in office.

The projects executed by the agency include: an Information and Communication Technology (ICT) Centre at Kota-Ekiti worth N6.2 million and the Community Civic Centre valued N8.5 million respectively in Ekiti East Local Government Area.

The governor admonished the communities to ensure judicious use of the facilities.

The representative of EKSCDA, Dr Olusegun Ayeni, in his opening remarks said that the projects were community-driven development, in which the people chose that which would positively affect them directly.

Chief Gabriel Agboola, who spoke on behalf of the community, promised that they would ensure the protection and the maintenance of the facilities.

Some of the dignitaries at the occasion include: the traditional rulers of Kota-Ekiti, Oba Ojo Fagbemi and Omuo-Ekiti, Oba Noah Omonigbehin.