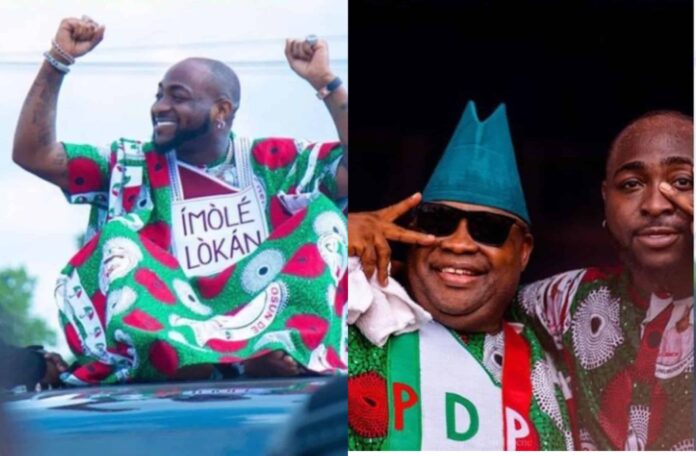 The ace singer David Adeleke popularly known by his stage name of Davido today received what he did not bargain for over his comment on the recently conducted election in Osun State which involved his uncle, Senator Ademola Adeleke. INEC had announced Senator Adeleke as the winner of the election, but his main challenger who is also the incumbent governor of Osun, Alhaji Adegboyega Oyetola is now challenging the result of the election in the Governorship Election Petition Tribunal holding in Osogbo, the state capital. One of the grounds upon which Oyetola is challenging the result of the poll is that there were incidences of over-voting in 749 polling units where Adeleke was said to have won. In the Reply to the Petitioners’ claims which was submitted last week, Adeleke agreed that though over-voting took place in some units, he held that it was not up to 749 polling units claimed by Governor Oyetola and his party.

In his tweet, which many of his fans have found rude, immature and unpleasant, Davido insulted the state governor, accusing him of spreading lies.

Davido wrote, “Your actually just a bad human being … @GboyegaOyetola no other way to put it spreading lies everywhere destroying ur legacy (not like you even have) … it’s done and dusted @inecnigeria Abeg is there any such thing as over voting with your new BVAS Machine? NOV 27th WE MOVE !!”

However, in quick reactions, many of the singer’s followers called him out for being arrogant and advised him to allow Tribunal to do its job.

According to Setofunmi Alo who tweeted @TheAloset, “ Contesting  the outcome of an election is not a vice. This matter is before the court of law. All what your uncle and INEC need is to defend the declared result and counter the alleged malpractices. Leave the ranting to your paid lawyers.”

In the opinion of Wale S. Akerele who tweeted @akerele “But your uncle agreed that there was over-voting in some polling units. Let the court judge. Oyetola is an elderly man. Have some respect for him.”

Abdullahi Tadese tweeted, “As an exposed and civilised guy as you are, you’re not being updated about the ongoing issue of your uncle and his party. Na wa o. @inecnigeria will answer your question.”

Ismael @Isma was unhappy that Davido chose to disrespect the governor of his state. He wrote, “…you calling out our governor in this manner bellittles you and your Omoluabi we stand for. Your Uncle also challenged Oyetola in the last election in Tribunal so what is the new thing there?”

Segilola @segilola tweeted, “What’s all the ranting for though? The matter is in court. If your uncle comes out triumphant, so be it; if he loses, so be it. All this immature shouting no follow abeg.”

Tweet of Lekan Yusuff, @lakelekan was similar to Segilola’s above, “This your tweet really shows that there is something to worry about the election especially on the issue of over-voting.”

Adewale @skilbanji was sarcastic in his own opinion, “Your uncle done lule again” alluding to the 2018 experience when Oyetola defeated Adeleke to become the state governor.

Hailey @AzizPrDeyForU in his own derided the singer and called him a dreamer. “When Tribunal sacks your uncle, your eye go clear.”

“Why is David complaining about the election Tribunal all the time?” Adeleke Adenuga who tweeted @princesuleto asked. “Seems the stuff is not going in the way of your uncle again,” he added.

Governor Oyetola and the All Progressives Congress, in their Petition, are appealling to the Tribunal to cancel votes returned in the 749 polling units where over-voting are said to have been recorded. The polling units cut across 10 local government areas in the state. They are also seeking Adeleke’s disqualification on account of what they called forged credentials he submitted to the electoral body.