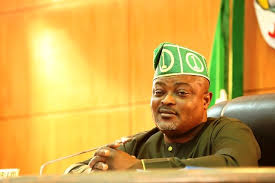 Speaker of Lagos House of Assembly, Mudashiru Obasa, has lauded Federal Government’s dissolution of the Federal Special Anti-Robbery Squad (F-SARS), describing the decision as proof that democracy has come to stay.

Obasa, in a statement in Lagos on Monday, commended President Muhammadu Buhari for hearkening to the cries of the people and ensuring their immediate wish was met with the disbandment of the police unit.

It was recalled that the Lagos State House of Assembly had on Friday adopted a seven-point resolution, one of which was that F-SARS be scrapped.

The Lagos lawmakers had also called on the National Assembly to immediately commence a probe into the allegations of inhuman treatments meted out to innocent Nigerians by the personnel of the disbanded police unit.

The Inspector-General of Police (IGP), Mohammed Adamu, on Sunday announced the dissolution of F-SARS and added that other reforms would be announced soon.

Obasa commended those who took to the streets in the state for their civility while the protests lasted.

The speaker said it was commendable that the protesters carried out their agitations with utmost respect for the authorities and without acts of vandalism.

He said: “It is a win-win for the country and a proof that the President Muhammadu Buhari administration is prepared to listen to the yearnings of the people where they matter.

“A special commendation goes to Nigerians, who expressed their grievances peacefully for days.

“As the country awaits more police reforms as announced by the IGP, we plead with the masses to remain calm.

Obasa urged the protesters to go about their activities peacefully and continue to be good citizens of the country.