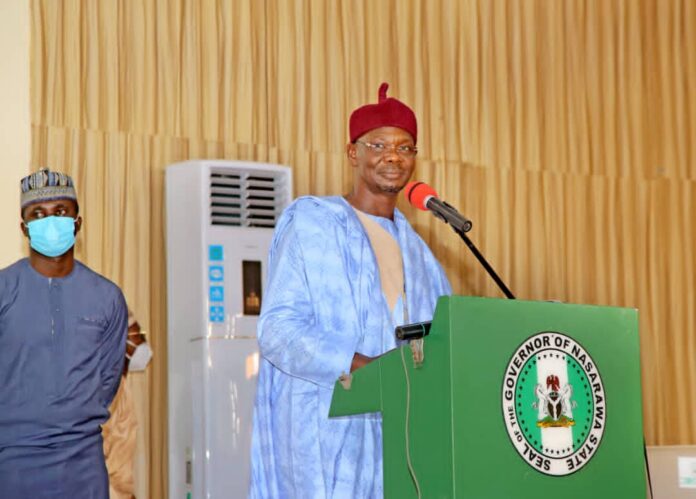 Nasarawa State Governor, Engineer Abdullahi Sule, has vowed that his administration will not rest on its oars, until local government areas in the state pay their workers full salaries before month end.

Engineer Sule made the vow while speaking at the grand finale of the Baraya Vanguard/Engineer A. A Sule Coordinators, awareness and sensitization campaign, for the Nasarawa West zone, which held at the Nasarawa State University (NSUK), on Saturday.

According to the Governor, even though the State Government has been able to pay its workers full salaries and before the 29 of every month, same cannot be said about workers at the local government level.

To this end, Engineer Sule said his administration is working hard towards addressing certain observed lapses in the financial activities of the councils, assuring that when the ongoing exercise is carried out to its logical conclusion, there will be sufficient funds available for local government areas to not only pay full salaries before month end but also pension and gratuity of their retirees.

The Governor described as unacceptable, a situation where the councils could not pay a pensioner whose monthly wage is a paltry N15, 000, having spent the better part of his or her life serving the state.

Engineer Sule urged the people of the state to support his administration in order to introduce sanity into the financial conduct of the local government areas.

“In 2012, there was an embargo against employment. Since then, some workers must have died, retired or resigned. Instead of the wage bill to reduce, like that of the state, the wage bill of the local government areas continue to increase,” the Governor lamented.

While attributing the fall in revenues at the councils to the negative effect of the outbreak of the coronavirus pandemic, Engineer Sule however warned local government chairmen that it’s no longer tenable for them to solely depend on monthly subvention from the Federal Government but that they must evolve means of generating internal revenue.

He added that even though the State Government directed the councils to pay one month salary to workers and pensioners, it was meant to cushion their suffering, pending the completion of the ongoing screening and verification exercise to ascertain the actual workforce in the councils.

The Governor further tasked officials of the ruling All Progressives Congress (APC) at the local government level , on the need to support the councils by ensuring that the right thing is done.

Engineer Sule thanked members of the Baraya Vanguard, as well as Engineer A.A. Sule Coordinators, for taking it upon themselves to go round the state in order to show appreciation to the people for electing him as Governor of the state.

Earlier, first civilian governor of the state, Senator Abdullahi Adamu (APC, Nasarawa West), commended the two political support groups, for coming out to propagate the activities of the Governor ahead the 2023 general election.

Senator Adamu restated his earlier pledge that no member of the APC from the Nasarawa West Senatorial zone, will contest against Engineer Sule come 2023.

The former governor announced his decision to lead the Baraya Vanguard as its grand patron.

State Secretary of Baraya Vanguard and Commissioner for Health, Pharmacist Ahmed Baba Yahaya, said the group has over 30, 000 members across the state, with the ongoing sensitization and awareness campaign aimed at showcasing the achievements of the Governor to the grassroots.

Others are, Senior Advisers to the Governor, Hon. Murtala Alhassan Lamus, Hon. Samuel Egya, as well as SSA Engr Idris Mohammed, among others.