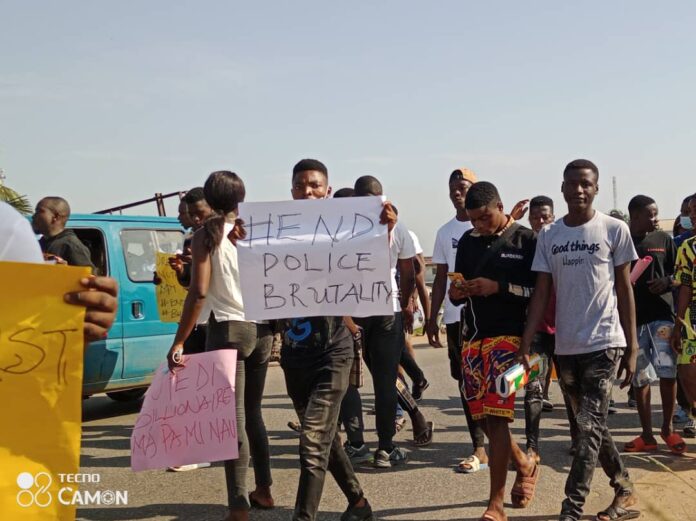 The #EndSARS protest in Osogbo,Osun state turned violent on Saturday as a protester was killed and an attempt was made on the life of the Governor of the State, Mr Adegboyega Oyetola.

One of the protesters simply identified as Oloyede was reportedly macheted by the thugs.

The hoodlums also dispersed the protesters but they were said to have gone to regroup around Technical College Area.

According to a statement issued by the governor’s media aide, Mabel Aderonke regarding the attempt on the life of the governor, she disclosed that while the governor was addressing the protesters at Olaiya junction, some hoodlums swooped on the Governor with guns and cutlasses.

The statement reads further: “Governor Oyetola had joined protesters in the walk from Alekuwodo area to Olaiya junction, singing with them and promising them that their demands will be looked into and that he supported how their peaceful agitations which is a part of the democratic process.”

“He told the protesters that the presidency has directed all state governors to constitute a judicial panel of inquiry to look into the SARS activities before it was disbanded.”

In his words, “The excesses of the SARS Personnel are too much and they have to be checkmated. So I agree with you and we understand your plights.

The Governor commended the youths for displaying ethos of Omoluabi and comporting themselves peacefully during the protest said he also condemned the action of the SARS Personnels, adding that they were saddled with the responsibilities of protecting the citizens not to kill them.

“While still addressing the youths, the armed men and women started shouting, hurling stones at the Governor’s car,” the statement read.

It was gathered that several people were severely wounded as many others scampered for safety.

Also, some victims have been reportedly rushed to Asubiaro state hospital for medical attention.

The #EndSARS protests have been taking place across major cities in the country with youths demanding an end to police brutality and killings.

Major highways across the country have been blocked thereby grounding economic activities.