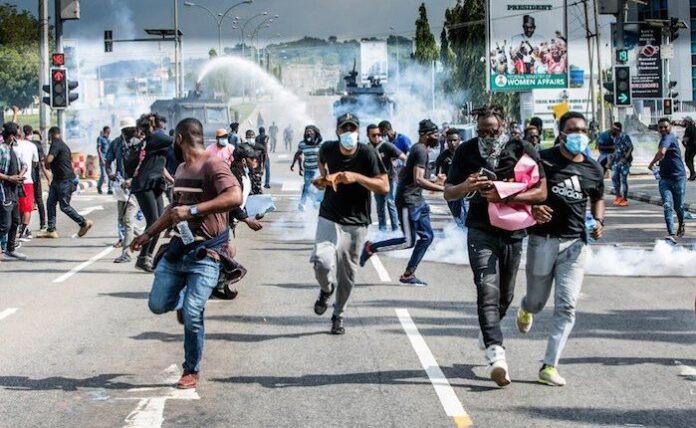 …FG will pay heavily for killing the youths, says Afenifere

…US closes consulate in Lagos

…CCTV disconnected before shots were fired at protesters

In a bid to curtail the #End SARS peaceful protest by the Nigerian youths that had since turned violent, the governors of Lagos, Plateau Osun and Ekiti  states have declared 24 hours curfew from 12am of today. In Lagos State, unconfirmed number of protesters were shot dead while scores were injured when security personnel allegedly opened fire at protesters in Lekki toll plaza in Lagos. Security lights and CCTV cameras were turned off before shots were fired at the protesters.

The action of the security personnel followed the imposition of 24 hour curfew in the state by Lagos state governor, Mr Babajide Sanwo-Olu.

However, the protesters were adamant as they refused to vacate the tollgate insisting that government must respond to their demands.

Our Correspondent gathered that some of the protesters were waving the green-white-green Nigerian flag while others ran frantically as guns boomed.

Some protesters, including ladies, were seen lying on the road either due to shock or gunshots. Blood stains were also seen at the scene.

Several Twitter commentators condemned the attack on unarmed protesters, describing it as a sad day for Nigeria. “The world is watching,” some tweeted wile one commentator said: “The Nigerian version of Tiananmen Square is playing out right now at Lekki Tollgate.”

A radio reporter at the scene said that soldiers had succeeded in taking over the tollgate after dislodging the protesters.

In an exclusive chat with Nigerian NewsDirect, the Spokesman of Pan Yoruba socio-cultural group, Afenifere said the blood of those killed will forever haunt their killers.

“On our part as Afenifere, we have consistently queried the reason Mr President put the security architecture of the country in the hands of people from a particular part of the country “

In order to stop rising cases of attacks by hoodlums that hijacked the peaceful protests, Governor Dapo Abiodun has shut down schools in the state till Monday, 26th of October.

This is a follow up to attendant destruction of properties and loss of a Custom officer in one of the border towns in Ogun State on Tuesday, Gov Dapo Abiodun

In a statement signed by the SSG, State of Osun Prince Wole Oyebamiji, the state Government announced 24-hour curfew following  the unfortunate dangerous dimension the #EndSARS protests have assumed across the country, particularly in the South West States.

Oyebamiji said but for the providence, the Governor would not have been alive to preside over yesterday’s security meeting following the attempt on his life last Saturday. ” In spite of the Saturday incident, we have allowed the protest to continue in the hope that the real protesters would take charge of the protest.

“ Events of the last 48 hours have however shown clearly that the protests have been hijacked by criminals and hoodlums,

He added that as a responsible and responsive government that took the sacred oath to protect the lives and property of our citizens, we will not sit and watch criminals unleash terror on our State.

Consequently, the SSG said the Governor of the State of Osun, Mr. Adegboyega Oyetola, decided to impose a 24-hour curfew  on all parts of the State, effective from 11.59 pm today, Tuesday, October 20, until further notice.

He warned that by implication, there shall be no movement except those on essential duties who will be permitted to move around. “These set of persons must have valid identifications to move around during the period of the curfew.”

He advised all citizens and residents to comply with this directive as any person found contravening this order shall be arrested and made to face the wrath of the law.

In Ogun State, Gov Abiodun said the security agencies who are now on red alert would from today, Wednesday be patrolling the state to deal decisively with anyone or group of people who might want to jeopardise the peace of the state under any guise.

The governor who broke the news of the death of a yet to be identified Custom Officer by some mob on the commercial motorcycle, popularly called Okada around one of the border towns in the state, on Tuesday, equally suspended operation of Okada for today, Wednesday saying that this decision would be reviewed at the end of today to know what next step to take.

Gov Abiodun while speaking at a press briefing on the updates of the End SARS protest held on Tuesday night at the Governor’s Office, Oke-Mosan, Abeokuta said that these decisions were taken after meeting with security chiefs in the state. This he said was in response to the assessment of the prevailing situation, particularly emerging threats to public safety and security in the state.

The governor regretted that the protest which began peacefully was now descending to anarchy with destruction of public properties belonging to the security agencies, blockade of highways and other roads across the state, the attack on the convoy of his deputy, Engr Mrs Noimot Salako-Oyedele among others saying that no responsible government would fold its hand at the turn of event.

The governor said despite the commitment of the state government as well as the dissolution of the SARS unit of the Nigerian Police by President Muammadu Buhari, the youths had continued with the protest that is now becoming violent across the country.

Abiodun said in the light of the present reality “all schools are closed till Monday, 26th October, 2020. Operation of commercial motorcycle, popularly called okada, is suspended across the state for tomorrow, Wednesday, 21st October, in the first instance.

“Increased security around the correctional centres and public buildings. Blockade of highways and molestation of innocent citizens going about their lawful business by protesters will no longer be tolerated. Deployment of joint patrol teams of security agencies to ensure no threat to public security”.

Abiodun, again extended his olive branch to the youths requesting them to appoint leaders amongst themselves for a meeting with the governor for further dialogue.

The governor said the measures taken for now would be reviewed according to trend of developments on a 24-hourly basis but that he would not hesitate to announce stringent measures as may be considered necessary.

He disclosed further that, “I must emphasise that we cannot fold our arms and let the state descend into anarchy. No right is absolute. In exercising our rights, we must respect the rights of others. There cannot be a better tomorrow, if we destroy today and the foundation being laid for tomorrow.

“Let me warn that Ogun State will not be conducive to anyone who may want to test the resolve of government to provide security or those who may want to come from other states to foment trouble in our dear State. The security agencies have been directed to ensure full compliance with the measures announced to ensure security of lives and properties.”

The governor has therefore appealed to all parents, guardians, traditional and religious leaders and indeed all stakeholders to rein in their children and wards to avoid any act that may breach public peace or bring them into confrontation with the law enforcement agencies.

He urged the people to take full advantage of the windows available to express grievances in peaceful manners, including the Ogun State Human Rights Complaints Report portal and allow time for full implementation of the various government initiatives in response to their demands.

Abiodun said, “We must continue to be on eagle alert so that some unscrupulous element who do not have the love of this Nation at heart; who do not share the same development ideals; who may want to take advantage of this situation for their selfish motives, to hijack the process. Our nation can ill-afford such a scenario. I have no doubt that, together, we can build a stronger, united and prosperous nation that works for all.”

In Ekiti, Governor Kayode Fayemi while  approving a dusk-to-dawn curfew across the state as part of efforts to ensure peace and normalcy said the curfew, would have both human and vehicular movements restricted across the state.

Governor Fayemi, in a statement signed by the Secretary to the state Government Mr. Biodun Oyebanji, said the decision was taken after careful consideration of the atrocities perpetrated by protesters suspected to be hoodlums.

The statement further stated that the security agencies had been ostensibly placed on alert to enforce compliance of the curfew.

It reads, “the Government of Ekiti State has observed with growing concern how the ENDSARS protest, which started as a peaceful protest against police brutality by youths in Ekiti State, has been hijacked by some hoodlums.

“The hoodlums have capitalised on the ENDSARS protest to rape, assault, rob and extort innocent citizens across the State. These are in addition to the wanton destruction of properties, particularly private properties.

“Government is concerned that if this state of affairs is allowed to continue unabated, it will lead to a breakdown of law and order thereby threatening the wellbeing of the people of Ekiti State.

“In the past 48 hours there have been incidents of gang-rape, robberies, physical assaults on innocent people, looting and burning of a police station.

“These acts of brigandage are not in consonance with the legitimate aspirations of the protesters. It cannot be logical to seek to remedy impunity with impunity.

“Consequently, the Governor of Ekiti State, Dr Kayode Fayemi, hereby imposes a 24-hour curfew on all parts of the State starting from 10.00 pm tonight, Tuesday, October, 20, 2020,” it said.

Lalong gave the order while briefing newsmen on Tuesday at the Government House in Jos.

“It is rather unfortunate that in the past few days , the #EndSARS protest which began peacefully have gradually degenerated to the situation where hoodlums have attacked and molested innocent citizens who are going about their normal businesses.

“This development took a new turn on Tuesday, Oct. 20, when the protest led to destruction of properties, cars and looting of business premises along Ahmadu Bello way, as well as the burning of a place of worship, on the  Gyero road Bukuru, In addition, three deaths have been recorded,” he said.

He said he summoned an emergency Security Council Meeting to evaluate the situation in order to take necessary action to forestall further escalation, saying the curfew was necessary to achieve that.

“Furthermore, all public and private businesses are to shutdown activities immediately while parents are strongly advised to rein in their children, youth and wards to forestall further breakdown of law and order.”