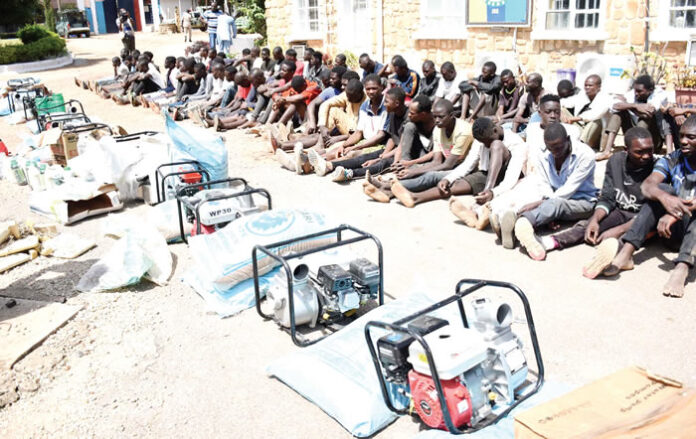 The Nigeria Police on Tuesday arrested 607 suspects over alleged looting in Lagos and Osun states.

The police in Lagos arrested 520, while 87 suspects were arrested in Osun state.

The Commissioner of Police, Lagos State, Mr. Hakeem Odumosu, said the suspects had been arrested for various offences ranging from arson, robbery, murder to unlawful possession of firearms during the #EndSARS protests.

He told journalists in Lagos that the suspects were arrested in relation to crimes committed as a result of breakdown of law and order resulting from the #EndSARS protests.

“The protests which started peacefully turned violent on Monday, Oct.12, when some criminally-minded hoodlums at the Surulere protest venue cashed-in on the precarious situation.

“They proceeded to attack the Anti-kidnapping Unit’s Office of the Command located at Iyun Road, Western Avenue, Surulere, with premeditated intention to liberate suspected kidnappers detained inside the facility.

“In the process, three of the policemen on duty were shot and critically injured while two suspects were set free,’’. the Commissioner said.

Odumosu said that Insp. Erinfolamin Ayodeji and one male civilian passer-by, Mr Ikechukwu Ilohamauzo, were hit by stray bullets and they later died in the hospital.

“It was then that it became crystal clear that the #EndSARS peaceful protest had been hijacked by hoodlums,” he said.

Odumosu said that six police personnel were gruesomely murdered while four civilians lost their lives during the crisis.

“Based on these incidences, the command was able to arrest 520 suspects for various crimes committed.

“One Olamilekan Ibrahim, male ,19, was one of those who broke into a new generation bank and carted away cash and other valuables. His share is N250,000 from the loot.

“Also, two male suspects: Ebere Ruben, 29, and Samuel Oyediran, 16, were arrested for their involvements in burning the BRT terminal at Berger and TVC Station in Lagos State,” he said.

Odumosu said that contrary to rumour, policemen were seen at their posts as directed by the Inspector General of Police to protect lives as well as public and private properties.

“We have restrategised and our men come out as early as 5a.m. to their various posts to ensure that there is no further breakdown of law and order.

“I will like to commend the community leaders and stakeholders for their support with useful information which has helped in the recovery of looted arms, ammunition and other valuables,” he said.

However, the Police Command in Osun, said the suspects were allegedly looting public and private property during the mayhem that attended the #EndSARS protests in some parts of the state.

While parading the suspects at the command’s headquarters in Osogbo, the state Police Commissioner, Undie Adie, represented by the Deputy Commissioner of Police in charge of CID, Adebola Hamzat, said that some of the looted items had been recovered from them.

“The resurgence of #EndSARS protests on Oct. 4 in Lagos had spread to all the 36 states of the federation and the FCT.

“It is of common knowledge that the erstwhile peaceful #EndSARS protests by the Nigerian youth over the excesses of the Special Anti-Robbery Squad (SARS) had snowballed into brigandage, murder, assault and arson as well as destruction and looting of public and private property.

“Osun has had her own fair share of these incidents, as attacks were carried out on public officials and innocent private individuals, destruction of government and private property and massive looting.

“A total of 87 suspects were arrested and the looted items are being recovered, while investigations on their culpability are ongoing,” he said.

According to the police commissioner, as soon as investigations are concluded, the suspects will be arraigned in court.

He, however, called on the hoodlums, who participated in the massive looting, to take advantage of the amnesty granted by Gov. Gboyega Oyetola and return the looted items in their possession, saying that the 72-hour ultimatum given to them would elapse on Oct. 28.

Adie said that after expiration of the ultimatum, anyone found with the looted items would be arrested and charged with armed robbery, conspiracy, brigandage, murder, house- breaking, stealing, receiving stolen property and other sundry offences.