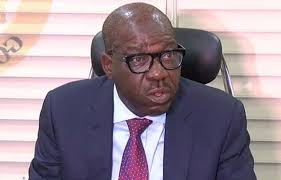 Gov. Godwin Obaseki of Edo on Monday inaugurated a 22-man Judicial Panel of Inquiry to look into the circumstances surrounding the #EndSARs protest in the state and country at large.

It was reported reports that the panel has representatives of all the security agencies, among other members.

It is headed by retired Justice Ada Ehigiamusoe.

According to Obaseki, the panel is expected to look into the circumstances surrounding what has happened as a consequence of the demonstration in Edo over the last few weeks.

“As you are all aware, our youths in the state have been protesting in the streets.

“The youths across the country have been protesting against the high-handed operation of the Special Anti Robbery Squad (SARS).

“Our youths have been demanding an end to all forms of police brutality; injustice and arbitrariness meted out by the SARS.

“They have also been demanding for a reform in the police, justice and restitution for the victims who have been affected by SARS brutality.

“Edo government fully agrees with the yearnings and the reforms in the Nigeria Police Force, as it is a requirement and a necessity if we are going to have a better Nigeria.

“A better managed police force will be of a great benefit to the government and people of Edo.

“This assurance can only be guaranteed if the policemen who have the constitutional responsibility to protect lives and properties are humane in carrying out their responsibilities in line with international best practices.

“In the face of destruction, they have had to maintain maximum restraint so that we do not lost any more lives,’’ he said.

Obaseki said the panel’s terms of reference included to receive complaints and petitions from the general public, particularly victims and all relatives, of all forms of police brutality in Edo and extra judicial killing.

He also said that it should recommend measures of compensation to victims and their families.

“The panel is to ensure that compensation is paid within 14 days of the decision to compensate, and to recommend and direct the Attorney-General to immediately prosecute all persons responsible for all various crime committed.

“You are to recommend measures to forestall such incidence in the future and to make any other recommendations to government in addition to your mandate.

“You have 90 days to complete this mandate,’’ he said.

Obaseki urged those who had suffered any form of police brutality to submit their complaints, petitions and suggestions to the panel.

Responding, the Chairman of the panel thanked the governor for the privilege given to them to serve.

She described the assignment as a “sensitive one’’ in view protests by youths across the nation.

Ehigiamusoe assured the governor that they would carry out the assignment with the urgency it deserved.

She appealed to the people of the state to be calm and support the panel.