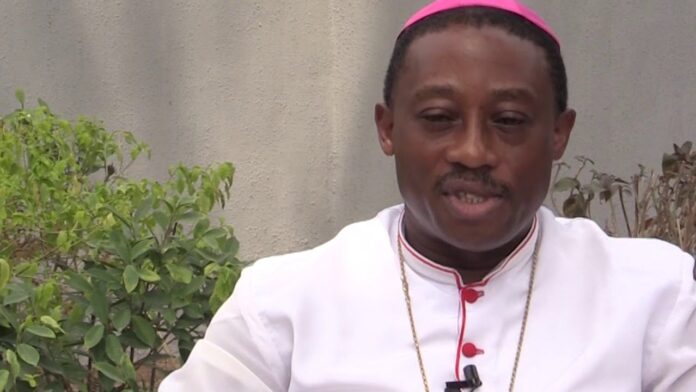 The Catholic Bishop of Abeokuta Diocese, Most Rev. Peter Odetoyinbo has called on President Muammadu Buhari not to only make the much talked about police reforms real, but also sustainable and enduring, such that would outlive his government for many years.

Bishop Odetoyinbo said that the sustainability of these reforms by successive governments would help the Nigeria Police to be more effective and efficient in their herculean tasks of protecting the nation.

Bishop Odetoyinbo, who made the call in a statement he personally signed and made available to newsmen in Abeokuta,on Tuesday, while reacting to the recent #EndSARS protest in the country and government plan to reform the Nigeria Police Force, said the sustainability of the police reform will bring an end to the continuous agitations of the people.

The statement read, “consequent upon the effort of the federal government of Nigeria to address the demands of the #EndSARS protesters, we wish to commend the government of President Muhammadu Buhari for the emerging reforms. The President did promise in his last broadcast to commit his administration to ensure that officers of the Nigeria Police Force are well attended to and we are beginning to see signs of commitment”.

“Some of the reforms observed include the signing of the New Police Act 2020 into law by the President which protects the rights of Nigerians against unnecessary brutality in the hands of the officers of the Nigeria Police Force and the declarations of right conduct in the case of arrest and prosecution”.

“We have also particularly observed that some State governors have promised the award of scholarships to the children of police officers lynched during the violence that trailed the #EndSARS protest; setting up of Security Trust Fund to address the salary structure of officers, reorientation and retraining in order to develop a relationship of trust with the citizenry”.

“Our concern is the sustainability of these reforms. We hope that such will not only end at mere promises whose implementation becomes impossible to fulfill not only by the present administration but subsequent ones”.

The Bishop said, “We are particularly concerned because of our experience of the political class making unrealistic promises impossible to fulfill in their administration and successive government”.

“Let the Police reforms be sincere and enduring as this is what can bring an end to the continuous agitations of our people”.

“Giving life insurance to police officers should not only be mere rhetorics to boost the morale of the officers but justifiably implemented considering the present situation of the COVID-19 pandemic”, he said.

Bishop Odetoyinbo condemned the burning of government structures and looting of warehouses and business centres, saying that the act have caused pain and economic hardships to many people in the country.

“Though the act is criminal in nature, let the government treat them like parents; ready to reform rather than condemn. As it appears that some correctional centres are beginning to reject the arrested looters”.

He charged government to consider other forms of sentencing that will be reformative rather than incarceration, particularly with the already overcrowded correctional centres nationwide.

“Beyond the act of looting and breaking into warehouses which is condemnable in the face of the law, government should consider the raging looting of food palliative as the expression of hunger and anger by the Nigerian people who have been marginalized for too long”.

“It is therefore an occasion to intensify efforts to meeting the basic demands that will give every Nigerian a sense of belonging”.

“Let us not forget that such looters also exist in the political class who loot our commonwealth and consistently evade justice because of their political affiliation”.

“One of the promises of the present administration is the fight against corruption but we advocate that everyone be treated equally before the law”.

“Our youth have been denied access to sustainable future and this must be the concern of us all. We thank the federal government for the provision of the registration portal of =N=75 Billion Nigeria Youth Investment Fund (NYIF), thereby paving the way for interested young Nigerians between the age of 18-35 years to have access to capital loans for sustainable business growth. This is a step in the right direction”.

Bishop Odetoyinbo expressed hope that bottlenecks with ASUU will also be addressed as soon as possible, so that students in the Universities can return to school.

He enjoined government to commit itself to other reforms that will make life bearable rather than harsh for Nigerians to live peacefully in their fatherland.

He called for a platform for dialogue and meaningful consultations with relevant stakeholders in order to stem the tide of unrest in our nation.

“We called on Nigerians to be calm as the government commits to the implementation of the promised reforms that will see to addressing the concerns raised by the protesters”.

“We trust the government of President Muhammadu Buhari that he will walk the talk as we await the outcome of the Judicial Panels and subsequent justice for everyone that has suffered any damage as a result of the #EndSARS protest”.

“Let every concerned citizen pray for our country Nigeria as it is now clear to us that we need divine intervention in our nation”.

“We the religious leaders will continue to pray and support the government and the people of country by our prophetic voices to allow peace, justice and unity reign in our land. May God bless our country and the good people of Nigeria”.