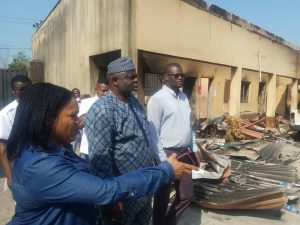 The Lagos State Commissioner for Physical Planning and Urban Development, Dr Idris Salako has expressed shock at the magnitude of destruction of the ministry’s agencies and properties during the #EndSARS protests in the state.

A statement on Wednesday by Mr. Mukaila Sanusi, spokesman of the ministry said Salako led a delegation of management and ministry officials on an assessment tour of district offices destroyed by hoodlums during the violence of the EndSARS campaign.

He lamented the attempt by the perpetrators of the arson to burn down the Lagos State Materials Testing Laboratory Headquarters, Ojodu, where the structures, equipment and documents were partially destroyed.

He noted that government had taken inventory of affected assets and was taking steps to rectify the damages.

“While the unfortunate incident is capable of bringing about untold hardship on Lagosians, especially property owners and developers, staff of the ministry must take a cue from the Governor of Lagos State, Mr. Babajide Olusola Sanwo-Olu, who has risen above the crises and communicated hope to Lagosians by declaring that Lagos will rise again,” he said.

Salako said efforts were ongoing to ensure that people in the affected areas were able to process their applications for Planning Permit and other approvals seamlessly.

He urged them to take advantage of the Electronic Planning Permit platform: http://epp.lagosstate.gov.ng.

He said the state would “expedite action on the initiative to strengthen the Lagos State Planning Information Centre 🙁 LASPIC) for the maintenance of durable planning records”.

The commissioner was accompanied on the tour by the Special Adviser to the Governor on Urban Development, Mr. Ganiyu Ayuba and the Permanent Secretary of the ministry, Mr. Foluso Dipe and many others.