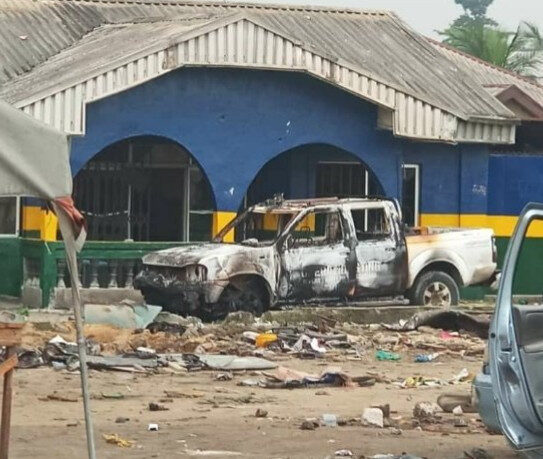 What started as peaceful protest has degenerated in loss of lives and properties in Lagos State on Wednesday.

The statement titled: ‘#ENDSARS#: Hoodlums Kill Policemen, Burn Stations, Government Facilities In Lagos’, read in part: “The hoodlums, who have been causing mayhem in Lagos State, under the guise of the ongoing Endsars protest, have killed two policemen at Orile Police Station, wounded many at various stations and set ablaze ten (10) police formations across the state.

“The violent and criminally-minded hoodlums descended on police stations/facilities and gruesomely murdered two policemen on Tuesday 20th October, 2020 and Wednesday 21st October, 2020, while others were critically injured. They looted the affected stations and carted away some valuables.”

According to the statement, other affected police stations include Idimu, Igando, Layeni, Denton, Ilenbe Hausa, Ajah, Amukoko, Ilasa, Cele Outpost under Ijesha, disbanded SARS officer under Ajegunle, Ebute-Ero Mushin (Olosan) where two policemen were shot by the hoodlums, Ojo and Ajegunle where 2 patrol vans each were set ablaze.

The statement read further: “Similarly, the hoodlums attacked three (3) new generation banks on Tuesday 20th October and Wednesday 21st October, 2020, respectively, and carted away unspecified amount of money while some parts of the banks were set on fire before they were dislodged, and some of them were arrested with the loots from the banks, including arms and ammunition.

“At Ajegunle Area, they burnt the Secretariat of Ajeromi Ifelodun Local Government Council and some valuables including cars; and some other private medical and commercial centres were attacked.

“Generally, due to the persistent attacks and mayhem caused by the hoodlums, four(4) people have been injured while others lost their lives.”

The Command however reiterated that in as much as it respects people’s opinions and rights, “it will not allow the present situation degenerate to anarchy and general insecurity where hoodlums will have free days to kill, destroy and loot people’s property with impunity.”

“The command will repel any group of individuals that might want to continue with these heinous and barbaric acts across the state,” the Command said.