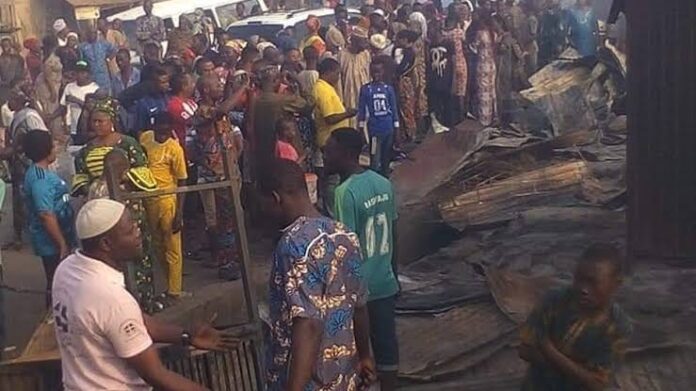 The hoodlums on Tuesday stationed “toll gates” across streets and major roads where motorists had an option to part with some money to continue their movement or turn back.

In Apata, Odo Ona, Orita Challenge, Akala Way, 110, Lam Adeshina Way, New Garage among other major areas of Ibadan, the Oyo State capital, were totally shut down by the protesters.

Traffics in the areas were congested as workers who were on their ways to work suffered untold hardship as the protesters insisted that no one would go to work.

From Challenge through Felele, Molete, Bode, Idi-Arere, Oja-Oba, Beere, Oje, Agodi gate, it was a field day for the hoodlums who formed barricades at almost every 100 metres distance to extort car drivers and motorcyclists by collecting amounts ranging from N50 to N200.

Following the eruption of violence in the state capital, the Oyo state government has directed all all private and public schools in Ibadan to close.

At least three people were shot dead during a clash between thugs and police at Ojoo in Ibadan Oyo State capital on Tuesday.

It was gathered that police opened fire at hundreds of youth during #EndSARS protest Tuesday morning. As a result, some thugs launched an attack on a police station in Ojoo, Ibadan.

At least five protesters who were present at the scene said that six other protesters are severely injured.The pictures and videos of the victims are also trending on social media.

In a state broadcast by the Governor on Tuesday in Ibadan, the state capital, the governor announced that security personnel from Operation Burst will be deployed to hot-spots to maintain law and order.

It reads: “My Dear People of Oyo State,
I address you at this time to talk about some of the issues that have been thrown up by the End SARS protests in Oyo State. I have always said that peaceful protests are an important part of our democratic process, and no one should be harassed or brutalised for protesting. For this reason, we deployed members of Operation Burst to protect protesters. And we are happy to report that there have been no cases of disruptions of protest grounds in Oyo State since they started work.

“However, the past two days have seen a new dimension to the ongoing protests. Thugs and hoodlums have taken advantage of the situation to perpetrate uncivil acts and harass citizens who are going about their day-to-day activities. Some thugs are going as far as forcing people who have businesses open to close shop and join in the protests. We know these are criminal elements. And so, as a state, we must act to protect the citizenry.

“Therefore, we are deploying members of Operation Burst to various hotspots in Ibadan to arrest the situation and restore normalcy. The members of the team will continue to protect genuine protesters and their right to protest. But we can not allow persons with ulterior motives to hijack the protests.

“We remain committed to the process of meeting the demands of these protests. Already, as promised, the Director of Public Prosecution, Ministry of Justice, Oyo State, has withdrawn cases against End SARS protesters, and those in custody have been released.

“Also, the Oyo State Government has set up platforms for reporting past and present incidents of police brutality and injustice. This will naturally pave the way for the next steps in our quest to get justice for the victims. I urge the good people of Oyo State to trust the process that we have set up and rest assured that every case will be pursued to a logical conclusion.

“I have directed that all schools in Ibadan, should be closed from tomorrow, Wednesday, October 21 2020 for the rest of this week. The situation will be reviewed on Friday, October 23 2020, and then further directives will be given.
Please call 615 should anyone attempt to disrupt your legitimate business activities.

“We will continue to seek ways to engage with peaceful protesters. Our plan is that in the shortest possible time, we can finally say the days of large-scale and wanton police brutality and injustice is a thing of the past. Let me also use this opportunity to call on members of the Nigeria Police Force to remain professional in the discharge of their duties as they will be held responsible for their actions. Good bless the Federal Republic of Nigeria. God bless Oyo State.”