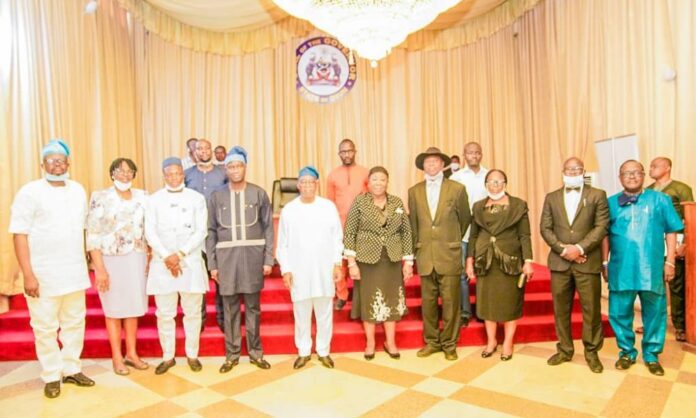 Gov. Gboyega Oyetola of Osun on Thursday inaugurated a 12-man Judicial Panel of Inquiry to look into alleged brutality and other forms of rights abuses by officers and men of the disbanded Special Anti-Robbery Squad (SARS) of the Nigerian Police.

Inaugurating the panel, Oyetola said the establishment of the Panel is in keeping with Section 21 of the Commission of Inquiry Law Cap 29. Laws of State of Osun 2002 and in line with the directive of the Federal Government to all the 36 governors and the Minister of the Federal Capital Territory.

The governor said that security of lives and property is the primary purpose of government and the police constitute one of the critical branches of the executive charged with ensuring the achievement of this responsibility.

According to the governor, “It is therefore strange and absolutely unacceptable that those charged to protect with integrity will become an embarrassment to their calling.”

Oyetola said that the Panel will be chaired by Hon. Justice Akin Oladimeji, a retired Judge of the High Court, and it has six months to round off the assignment.

The terms of reference of the panel, according to the governor, are to receive and investigate complaints of Police brutality, human rights violations and related extra judicial killings.

It is also to evaluate evidence presented, along with other surrounding circumstances, and draw conclusions as to the validity of the complaints.

To recommend indicted police officers involved in brutality to the Police authorities for appropriate discipline and prosecution as appropriate.

The panel is also to recommend compensation and other remedial measures, where appropriate, to appease the victims of police brutality.

It will investigate the violent attack carried out against the governor and his entourage at Olaiya roundabout on 17th October, 2020, and make appropriate recommendations.

The governor urged members of the panel to approach the assignment with the highest sense of responsibility, fairness and integrity so that justice will not only have been done, but will also be seen to have been done.

He said: “I therefore urge members of the public to come out to make presentations to the Panel in the interest of justice .

“The modus operandi for exercising this right by members of the public shall be communicated to them by the Panel.

“I assure you all that the recommendations of the Panel shall be implemented to the letter and with dispatch in line with the requirements of justice administration and delivery.

“On this note, let me appeal to our youths, who are the genuine protesters to give us a chance to run through this process by suspending their street protests.

“This, Government believes, will aid the security operatives to rid our State of miscreants, who have hijacked the protest for other pecuniary gains”.