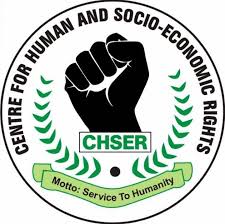 The Centre for Human and Socio-economic Rights (CHSR) on Monday advised the Nigeria Police to do due diligence and proper screening before prosecuting those arrested for violence and looting that trailed #EndSARS protests in some states.

The National President of CHSR, Mr. Alex Omotehinse, made this plea in a statement in Lagos following the police arrest of some persons suspected to be involved in the massive looting and destruction of public and private property recently.

“Our attention has been drawn to the arrest of some Nigerians in connection with the anarchism that befell the country after the shooting of the #EndSARS protesters, which resulted in looting, maiming and burning of public property.

“We want to use this medium to appeal to the police authority- the Commissioner of Police, Lagos State command and the Assistant Inspector-General of Police (AIG) Zone 2, to please ensure there should not be any transfer of aggression to the suspects.

“There must be painstaking screening of the acclaimed over 200 suspects arrested so far in connection with the illegal acts in Lagos.

“It is obvious that some innocent citizens can be among the victims of circumstance,” Omotehinse said.

According to him, the CHSR has been receiving complaints since Saturday from some victims’ relatives that their children were arrested in some areas where there were no crises and they were joined together with those picked from scenes of the incident.

He added: “We do not want to believe this to be true.

“CHSR, as reputable right group, is in full support of the police to bring all the evil perpetrators to book.

“But we are also appealing that a due diligence and unbiased screening should be conducted for the arrested suspects before prosecution.

“The report reaching us is that some families have been denied access to their children since Friday (Oct. 23), due to the nature of the case.”

Omotehinse said that the police should ensure that only the culprits and criminals suffer for their illegal deeds.

“We are appealing to the police authority to please ensure that if it is only five people found to be culpable out of the over 200 suspects arrested, they should be the only people that should be made to face the wrath of the law.

“This is better than to prosecute all the arrested suspects just because some police stations and officers were affected in the fracas.

“The law says it is better for 99 accused to escape justice than to convict one innocent wrongly,” he said.