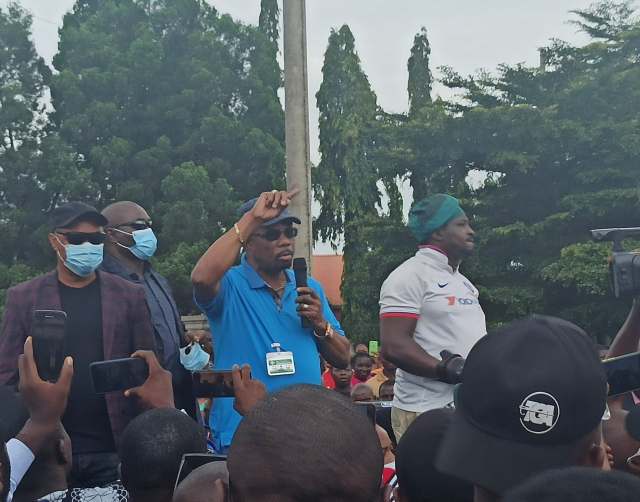 Anambra state governor, Willie Obiano has given in to the demand of  #ENDSARS protesters who called for the sacking of his security aide, and Former OC, Awkuzu SARS, CSP James Nwafor.

The governor while addressing #ENDSARS protesters in Awka on Thursday made his decision known while describing the demands of the protesters as genuine and germane.

Previously on Wednesday, Nigerian Newsdirect published a report on how protesters in Anambra state on Wednesday closed down the streets of the Anambra State capital, Awka and demanded the prosecution of a former SARS boss in Anambra, CSP James Nwafor who headed the squad in Anambra, accusing him of killing and maiming countless young people.

A statement released by Gov. Obiano’s twitter handle @WillieMObiano said: “Today, I joined youths of our dear State to say #EndPoliceBrutality and I support them because they did not only vote and defend their votes in my 21-over-21 victory but all their requests are genuine and germane, and I oblige to honour them all.

I felt honoured being in their midst to share in their feelings, and I made it clear that: first, Federal Government has disbanded SARS but I will personally visit all SARS offices in Anambra State to ensure that anyone being held is released, immediately; Second, James Nwafor, former OC SARS in Anambra State is sacked and will be prosecuted; Third, I’ll ensure that the Presidency does the needful to ensure a better life for our youths, for us, ndi Anambra and for our nation. Long Live Anambra Youths!, Aluta continua!”