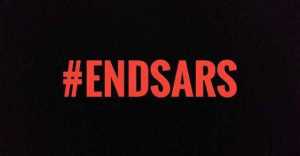 More youths have trooped out to renew the agitation for #EndSARS in Osogbo, Osun State.

The protesters who blocked major roads on Tuesday, forcing motorists to turn back, flooded the Popular Olaiya junction while they expressed displeasure over brutality and extrajudicial killings by the Special Anti-Robbery Squad (SARS).

The Youths who refused to allow motorists ply the roads staged musicals, entertaining themselves with loudspeakers and disc jockey. Some were seen carrying a coffin with the picture of the President on it while some inscribed ‘End SARS’ with paint on the road.

Road users lamented as they turned back to use alternative roads which are badly damaged and abandoned.

Commuters were also seen trekking long distances due to the road blockage which restricted the movement of commercial vehicles.

In the words of one of the protesters, “We will not stop this protest until the government puts an end to the abnormalities in this country. Every day we are been killed and the President is saying nothing.

“Generations to come will be happy that we did this; we are ready to take the protest far until something good comes forth.”