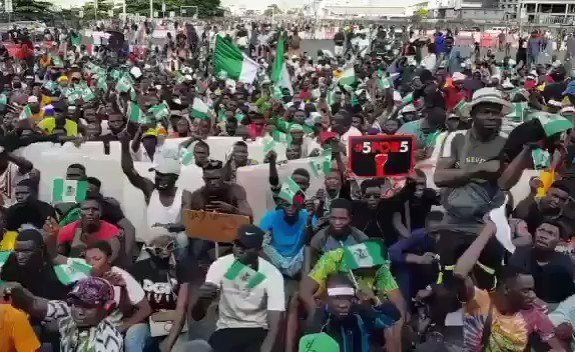 An activist in Osun State, Ayo Oloogun has enjoined youths across the state to call off agitations and protest against police brutality.

Ayo called on other comrades to avoid any form of public gathering in respect of #EndSARS, urging them to uphold the collective suspension of protest.

This, according to the protesters, would allow the state government to carry out necessary steps towards meeting their 5-point demand as endorsed by the Federal Government.

According to Ayo Oloogun on Monday, the suspension was compelled by criminals who have hijacked the protest, thereby disrupting the original intent of the agitation.

Oloogun expressed displeasure with the tragic event saying, “Unfortunately, in the course of our genuine struggle for the emancipation of the weak and downtrodden, and better society of our desire, some unscrupulous elements with divisive tendencies sneaked into the barricade and disrupted our procession.

“The most disheartening and pathetic of this rude obstruction of our movement to the point of egalitarianism was the kleptomaniac tendencies of these individuals, who used our popular struggle as a cover to steal, maim, and vandalise our common patrimony.

“Going forward, therefore, as we implicitly comply with a 24-hour curfew imposed on the state by the government, for the ultimate goal of returning sanity and peace into the state, we hereby use this medium to notify our teeming youths that every agitation and protest has been put on hold.

“We were astonishingly taken aback, and utterly saddened with the criminal manner these elements went about looting both public and private properties and almost turned the state to the arena of anarchy and turmoil, before the swift intervention of the state government.”

Ayo further stated that “anybody caught on the street doing otherwise under the guise of #EndSARS protest would be treated as a defiant and such individual will consequently face the full wrath of the law.”

He commended the youths for their doggedness and resilience in showcasing genuine concerns for nation-building and just society by joining their comrades across the country to agitate for an end to police brutality and brigandage.

In his words, “The patriotic commitment and stance of our youths against brutal force and unlawful activities of the disbanded Special Anti-robbery Squad (SARS) remain unforgettable and exemplary; it is indeed a watershed in the annals of our dear country.”