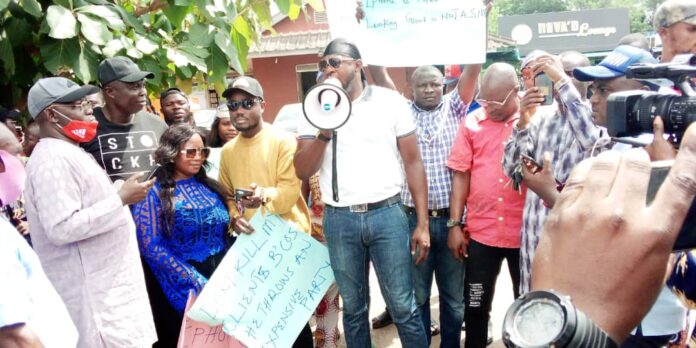 The protesters who have in their midst popular Nollywood actor and Fuji musician, Odunlade Adekola and Alhaji Sefiu Alao respectively took off from Panseke area of Abeokuta and walked through Oke Ilewo to Iwe Iroyin, the Secretariat of Nigerian Union of Journalists (NUJ) Ogun State Council.

The protesters were armed with placards bearing all kinds of solidarity messages for the federal government not to just disband the Special Anti-Robbery Squad (SARS) of the police but to begin wholistic reforms that would make the Nigerian Police be civil in their conduct an operate according to international best practices.

Some of the inscriptions on their placards read; FG must end police brutality now, Looking good is not a crime, iPhone is not a gun, Don’t kill me because I am looking good among others.

Addressing journalists during the protest, National President of TAMPAN, Bolaji Amusan said it was high time the government took decisive actions that could straighten Nigeria Police and make them discharge their constitutional duties without molesting anybody.

He said “after End SARS protest, what next? It’s time for the federal government to begin wholistic reforms in the police. The police must stop this brutality against fellow Nigerians. We are saying no to all forms of intimidations, illegal arrest and extra judicial killing.

“It is time for the police to respect the constitution and perform their duties in such a way that the rule of law is respected. Life is sacrosanct and must be dignified at all times, so, the FG must end police brutality now”